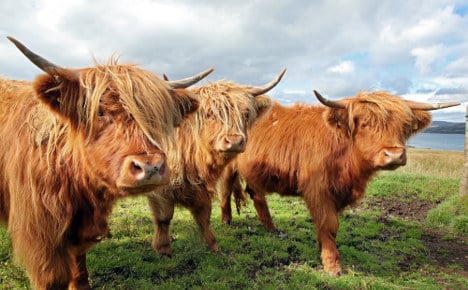 "They were trampling down fences and there was a danger they could have made it onto the roads.

"We saw no other solution" after consulting with vets and other experts, Schattauer said.

"The decision was anything but easy. It was a horrific scene."

A local farmer who owned the herd was present and trying desperately to round up his animals.

He told the newspaper that someone had left a gate open and that he had never had problems with his cows in the past.

But Schattauer, the neighbouring farmers and the local conservation society disagreed, saying that the Highland and Galloway cows had broken out several times in recent weeks.

They argue that the pasture wasn't properly secured against escapes.

"A woman riding a bicycle was attacked by a bull last week on the hiking trail," Schattauer said.

One neighbour had several fences trampled and will have to perform abortions on 20 of his milk cows after they were mounted by escaped bulls.

"We had to do something. Otherwise we'd have been in the stocks if something had happened," Schattauer concluded.

He obtained a special license from the hunting office and called in five riflemen to shoot the cows.

Dieter Wichmann of the Association of Liether-Moor Robust Cattle Farmers told the newspaper that it was a "gigantic mess, total idiocy.

"I believe that no-one took proper care of the animals," he added.

"You can't [take care of robust cattle] as an amateur or on the side, even if it's fashionable at the moment," he said.

But, "The animals are generally not dangerous, you just have to behave properly around them. I take school classes onto my pastures, even with bulls there's no problem," he said.

"Unfortunately it's more and more often the case that animals are the victims of hasty action, especially when the authorities responsible have to decide quickly as people might be in danger," Caterina Mülhausen of the German Animal Protection League told The Local.

"From the media reports, it looks like the shooting of the 21 cows wasn't necessary and not all other options were tried.

"The farmer should have made sure the fences around the pasture were more secure and had closer contact with his herd. Robust cow breeds like these are usually very calm.

"This case should be tested in court," she concluded.