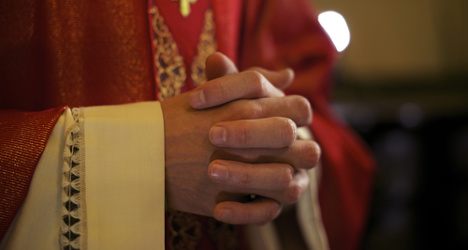 Bishop Juan María Uriarte was walking in a street in Bilbao on Thursday afternoon when a woman approached the Catholic priest, easily identifiable as such because he was wearing a dog collar, asking for alms.

Uriarte refused and the thief then stooped as if to kiss the bishop’s hand before ripping the bishop’s ring off his finger. The woman, who the eitb.com news site of the Basque public broadcaster quoted police sources as saying was "foreign", fled the scene and is now wanted in connection with the theft.

The broadcaster also quoted sources from the Bishopric of Bilbao who confirmed the theft of the ornament, explaining that the incident had taken place in María Díaz de Haro street in central Bilbao, where Uriarte tends to walk each day, as his residence is nearby.

Uriarte reported the theft to the Ertzaintza regional police force and explained that the value of the ring was mainly symbolic as it had been presented to him on his nomination as bishop. Born in 1933, Uriarte was named bishop of Zamora in 1991 before being transferred to the Basque Country.