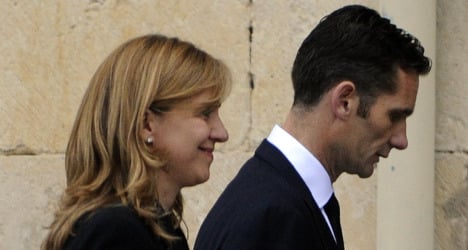 Three judges from a court in Palma de Mallorca in Spain's Balearic Islands took the decision on Friday after the princess pleaded not guilty to all accusations on July 2nd.

Cristina will now have to appear in court on two counts of tax fraud.

However, there is still a chance she will avoid trial if judges apply a discretionary power that allows for people who have not been accused by a public prosecutor to have charges against them dropped.

The case against Cristina has been brought by right-wing, anti-corruption group Manos Limpias.

According to the daily El Mundo, King Felipe VI, Cristina’s younger brother, was expecting that the princess would renounce her right to succession if the charges against her were maintained.

Princess Cristina de Bourbon is currently sixth in line to the Spanish throne. Urdangarin, still facing charges, and Cristina have been excluded from royal activities since 2011.

The prosecutor in the case, Pedro Horrach, has consistently opposed the bringing of criminal charges against Princess Cristina.

The newspaper El País reported on Thursday that Horrach had asked the court to consider the princess merely as a witness in the eventual trial, at which he will also demand a public liability bond of €500,000 ($624,000) which Cristina must pay jointly with Urdangarin. If she were called as a witness, however, the princess could refuse to give testimony about her husband, witnesses having the right not to testify against direct relatives under Spanish law.

Princess Cristina was charged with 16 others, including her husband, of embezzling public funds worth €6.1 million through the Nóos Institute after a two-and-a-half-year investigation led by Judge José Castro. Nóos organised sports and leisure events and conferences, allegedly charging inflated sums to regional governments in Valencia and the Balearic Islands and siphoning off the money despite officially being a non-profit company.

The supposedly charitable organisation was headed by the 46-year-old Iñanki Urdangarin, a former Olympic medal-winning handball player, between 2003 and 2006. His former partner, Diego Torres, is also suspected of fraud and embezzlement.

Cristina sat on the board of Nóos and Urdangarin was its chairman.

Investigators suspect that a separate company jointly owned by the couple, Aizoon, served as a front for laundering embezzled money which Nóos had first secreted away in tax havens. Part of the basis of the money-laundering charge against the princess was that she had spent money from the Aizoon account to cover family expenses.

Questioned by Judge Castro in court in February, Cristina said she had simply trusted her husband and had no knowledge of his business affairs. Although the question-and-answer session was held behind closed doors, lawyers who were inside the courtroom told reporters that Cristina had avoided most of the judge’s questions by responding: “I don’t know” and “I have no knowledge about that.”

A mother of four with a master's degree from New York University, Cristina was once considered untouchable as a member of the royal family.

But the so-called Nóos affair fanned public anger against the monarchy and ruling class during the recent years of economic hardship in Spain.

Urdangarin and Cristina have been excluded from royal activities since 2011.