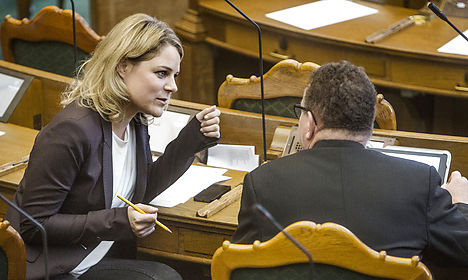 Enhedslisten's Johanne Schmidt-Nielsen is among those speaking out about online abuse. Photo: Thomas Lekfeldt/Scanpix
Politicians including Red-Green Alliance (Enhedslisten) spokeswoman Johanne Schmidt-Nielsen, the Social Liberals’ (Radikale) Zenia Stampe and the Socialist People’s Party’s Özlem Cekic have decided to break their silence about the stream of online threats and abuse they face on a daily basis.
The three MPs are among 15 participants in a new programme on DR2 entitled Ti Stille Kvinde (Shut up, woman) that is exposing the crude and abusive tone that women face online.
“I am going to come gang-rape you in front of your daughters,” one man wrote to public speaker Benja Stig Fagerland before mentioning the daughters by name.
“You are so fucking stupid, and my god your ass is huge,” another wrote to Cekic.
“May you die of breast cancer… and your family die of cancer,” another wrote to Schmidt-Nielsen.
The man behind that comment even sent death threats to a man who attempted to defend Schmidt-Nielsen on Facebook.
DR2 was able to track down the man’s true identity and discovered that more than 100 women have filed complaints against him for threatening behaviour, but attempts to track him down proved unfruitful. DR2’s Michael Jeppesen did however get another man who wrote a veiled rape threat to Schmidt-Nielsen to agree to participate.
“Bite the pillow, sweetheart. I’m going in dry,” a man named Kenny wrote to Schmidt-Nielsen after she wrote a Facebook update about public breastfeeding.
When Jeppesen confronted Kenny, he said he hadn’t considered how Schmidt-Nielsen would react to the comment and said he viewed it as “a bit of fun and games” and that “she read it in a way that it wasn’t intended”.
That, according to Schmidt-Nielsen, is precisely the problem: that people say things online that they would never say in real life. She said that just because she is a well-known person, she should be subjected to threatening comments online.
“It’s ridiculous that you should have to have such thick skin just to be involved in the public debate. That can’t be the way it’s supposed to be,” Schmidt-Nielsen said in the first episode of the three-part programme.
“This doesn’t belong in the public debate, whether it comes in the form of an email, over the phone or on Facebook,” Social Democrat MP Astrid Krag added.
In neighbouring Sweden, a similar campaign in 2013 attempted to confront the hateful tone faced by well-known Swedish women.
The first episode of Ti Stille Kvinde can be viewed online here and a clip of the participants reading some of the hateful comments they've received online can be seen below.