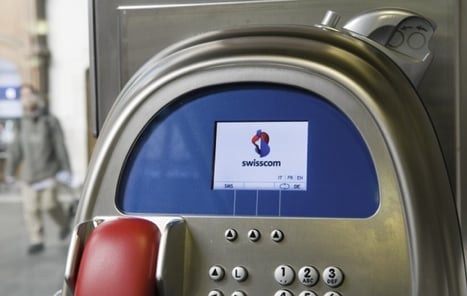 Swisscom said the high level of price erosion in its core Swiss business was offset by growth.

The number of mobile customers increased 2.4 percent to around 6.5 million, including two million subscribed to the Natel Infinity (unlimited usage) package.

With more than 21,000 employees, Swisscom boosted its capital expenditures in the nine-month period by almost eight percent to more than 1.7 billion francs, 1.2 billion francs of which was in Switzerland.

The company said it is continuing to expand its 4G/LTE network and more than 94 percent of Swiss customers are currently able to access the “latest generation” mobile network, a share that is expected to rise to 99 percent by 2016.

If the company reaches its objectives, Swisscom said it expects to pay a dividend of 22 francs per share for 2014.

Swisscom has justified the new charges by saying they are standard industry practice. Photo: AFP

Until now, customers have been able to receive one of these basic bills for free, but as of October 1st, a fee of 2.90 Swiss francs (around €2.60) will apply.

At the same time, the current fee of 1.50 francs for receipt of a detailed bill will rise to 2.90 francs.

Tell us: What is the best mobile phone deal in Switzerland for foreigners?

Meanwhile, people wishing to pay their bills over the counter at a post office will have to shell out 3.90 francs as of October 1st.

Customers affected by the changes will be notified on all their bills before the new charges come in.

Holders of basic service products including Swisscom Line Basic and Swisscom Internet Basic will be exempt from the new charges.

In a statement on the new fees on its website, Swisscom said that printed bills cost the company millions every year and that these costs should not be passed on to all customers.

The same applied to costs associated with over-the-counter services at post offices, the company said.

Swisscom also justified the changes by stating these were now standard industry practice.

For Sunrise, paper bills cost 3 francs for the basic version and 4 francs for a detailed version. Payment with a so-called red slip costs 5 francs whether this is done online or in a post office.