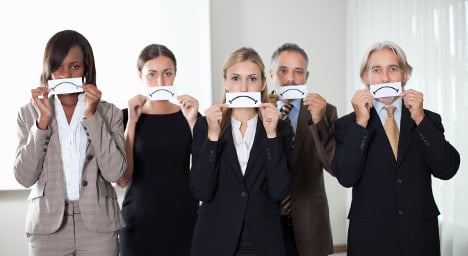 Despite a general move towards more open plan work areas, employees are happier when they have a private office, according to a European research study released Tuesday.

Research agencies l'Observatoire Actineo and CSA surveyed employees in five countries – Britain, Sweden, the Netherlands, Spain, and Germany – about their work environments, and what they believe to be the most important elements of their office.

The French were the least satisfied with their work environments, with around 78 percent of respondents expressing satisfaction.

In France, 88 percent of respondents in private offices said they were satisfied, versus 67 percent in open, communal ones. The French survey dated from 2013.

The study of 2,500 people, conducted between June 24 and July 1, analyses the satisfaction of workers based on criteria like office arrangement, temperature, and interest in the work that one is assigned.

But according to the survey, not everyone wants to work around their colleagues' chatter. The French care the most about noise, and consider human chatter a nuisance.

"Clearly, for French respondents, the source of office noise that caused the most problems was human noise," said Alain d'Iribarne, senior fellow at a social research centre in France, at a presentation of the study in Paris on Tuesday.

"This could open a discussion about whether or not employees in places like Britain are more social, but for the moment we haven't made that analysis."

The source of French unhappiness however may not just be about noise. A similar survey carried out in 2013 revealed it was smelly colleagues rather than the din of the office that angered French workers.

Number two in the list of colleagues' gripes was having to sit next to someone who complains all the time, and in third place was having to put up with co-workers who speak too loud. The Netherlands, seen as a sort of "El Dorado" in the European work world, has the most content employees of the five countries included, with around 91 percent responding as satisfied with 27 percent of those saying they were "very satisfied".

Overall, employees are happier when they have their own space. About 97 percent of Dutch respondents said they were satisfied in a private office, and 88 percent when they were in a communal office (of more than four people).

As far as social spaces, most employees in the five countries had access to private conference rooms, cafes and coffee machines, but the importance of such spaces differed.

But d'Iribarne said that quality of work life can be measured differently by different individuals.

"It's important to note that quality of life is subjective in these countries, and could mean different things to different people," said d'Iribarne.

There are thousands of employment offers in France – a simple internet search for jobs d’été came up with numerous jobs boards offering work in France, while the government-backed Centre d’Information et de Documentation pour la Jeunesse (CIDJ) offers advice and information on all aspects of life for young people in France, including finding seasonal work and summer placements.

Sectors including agriculture, hospitality and tourism are always recruiting in the summer, seeking fruit-pickers, holiday camp workers and serving/hotel staff.

But what are the rules for people seeking summer jobs?

READ ALSO Vendange: What you really sign up for when you agree to help with the French wine harvest

Children from the age of 16 (under certain circumstances, the age limit drops to 14) who are legally resident in France can work as long as they have written authorisation from their parents or legal guardians. A model authorisation letter is available here.

Those under the age of 18 cannot undertake certain jobs for health and safety reasons.

In the following circumstances, children as young as 14 or 15 can work during school holidays.

Salary is usually paid monthly and will have a payslip. For those aged 18 and over, pay will be at least equal to the minimum wage.

Under 18s have certain additional protections:

Right to work in France

If you’re a French citizen or hold permanent residency in France then you have the right to work, but for foreigners there are extra restrictions.

Anyone who holds the passport of a EU/EEA country or Switzerland, is free to work in France or to travel to France seeking work without needing a visa or work permit.

Most other people will need permission to work in France – even if it’s only for a short period or for casual work such as grape-picking. Depending on your country of origin you may need a visa – everything you need to know about that is here.

In addition to the visa, you may also need a work permit, which is the responsibility of the employer.  To employ anyone in France for less than 90 days, an employer must get a temporary work permit – before the prospective employee applies for a short stay visa. This permit is then sent to the embassy at which the employee is applying for a visa.

If you come from countries including the UK, USA and Canada you can spend up to 90 days in France without a visa – but you may still need a work (convention d’accueil) if you want to work while you are here.

Certain countries have specific ‘seasonal worker’ visas on offer, for certain sectors which allows – for example – Canadians to come to France and work the ski season.

Certain sectors which have a lot of casual workers – for example seasonal fruit-picking – do have cash-in-hand jobs, known in France as marché noir (black market) or simply travail au black (working on the black, or working illegally).

This is of course illegal and working this way carries risks – as well as the possibility of losing your job if labour inspectors turn up you are also in a vulnerable position. If your employer suddenly decides not to pay you, or make unexpected deductions from your wages, there is very little you can do about it since you won’t have any kind of work contract.