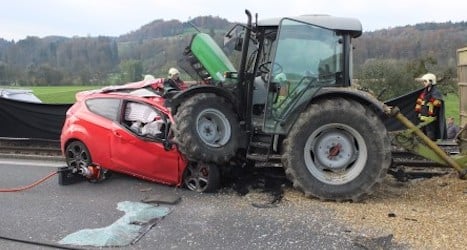 The accident occurred shortly before noon on the road between Teufenthal and Gränichen, Aargau cantonal police said.

The victim was driving a red Ford Fiesta toward Gränichen on a straight stretch of road when for reasons not explained he drove into the oncoming lane and crashed into a tractor, police said in a statement.

From the force of the impact the car was pushed beneath the heavy tractor and the victim died, according to the statement.

The tractor driver suffered chest injuries not believed from the initial evidence to be serious, police said.

He was transported to hospital by ambulance.

The cause of the accident which left the car a write-off and heavily damaged the tractor was unclear, police said.

The local prosecutor has opened a criminal investigation.