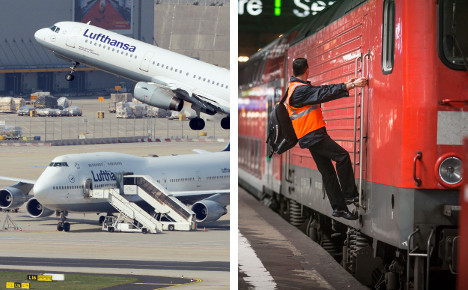 The president of pilots' union Vereinigung Cockpit, Ilja Schulz, told Focus magazine in its Monday edition that it had declared a temporary truce with Lufthansa.

"We are currently in talks again," said Schulz, whose union represents 9,300 pilots.

"We won't strike during the talks. The aim is to sign a wage agreement."

The pilots have staged nine walkouts since April over early retirement arrangements, forcing thousands of flight cancellations and taking a heavy toll on the company's earnings.

But, unlike the pilots, Bild reported that GDL leaders have been meeting at a secret location since 2pm on Sunday and will announce whether they plan further train strikes on Monday.

The tabloid reports that GDL leader Claus Weselsky has recently met several times with Deutsche Bahn (DB) president Ulrich Weber and may be announcing news of a deal or the rebuffing of his approaches to his union comrades.

The most recent weekend-long strike by the train drivers caused massive disruption, falling as many families were travelling to or from their autumn school holidays.

It was the union's third strike in two weeks over its right to take over representation of more train staff from larger union EVG, as well as demanding more pay and decreased working hours for drivers.