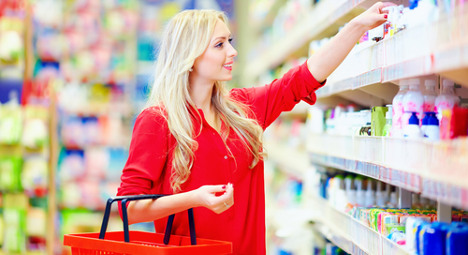 Do French supermarkets have an “invisable women’s tax” added to goods and services targeted at women? Woman shopping: Shutterstock

It appears it costs more to be a woman in France than a man.

French women’s rights group Georgette Sands has warned on Monday that women are likely to shell out more money than men for almost identical products and manufacturers are taking advantage of this.

In an online petition, entitled "Monoprix: Stop more expensive products for women! #Womantax", the group demands that French supermarkets get rid of the “invisible women’s tax” which it claims is added to goods and services targeted at women.

As part of their campaign, women from the group took snapshots of the prices of similar products targeted towards men and women.

In almost all cases, men’s products were found to be less pricey than those targeted towards females.

In one example, which is the cover photo for the petition, an image shows two packets of razors, one in pink packaging targeted at women and the other in blue packaging targeted at men. While the women’s razors are priced at €1.80, the men’s razors are priced at €1.72. This is despite the fact that the packet of men’s packet contains ten and the women’s packet just five.

Ironically, the razors were spotted at the French supermarket Monoprix, which translates as “one price”.

“At Monoprix, the prices are not the same! On the contrary, women pay more than men for similar products,” reads the petition, which is hosted by the campaign website Change.org.

In another case, a pink deodorant that lasts 48 hours for women was priced at €4.15 while the same product with black packaging for men cost €4.11.

And the price inequalities aren’t limited to supermarket products, according to the group’s findings.

At a French hairdressing salon a cut and blow-dry was found to cost men €8 while for women it costs €13.

“We know that there have been investigations in the United States and we knew that we would find differences, but not as many as we did and not as easily,” Géraldine Franck, who is part of the women’s group, told Le Parisien newspaper.

“After a three-hour walk in my area I had already taken about fifteen photos that speak for themselves,” she said.

The campaign has the backing of Pascale Boistard, the Secretary of State for Women’s Rights in France, who has tweeted her support for the petition.

“Is pink a luxury colour?” she muses, in a tweet about the difference in price between the two packets of razors.

The country's finance ministry at Bercy has also vowed to investigate the possible discrepancies.

By 3pm on Monday the petition had racked up almost 20,000 signatures.

PARTNER CONTENT
Have you tried these weird and wonderful British foods?
Url copied to clipboard!