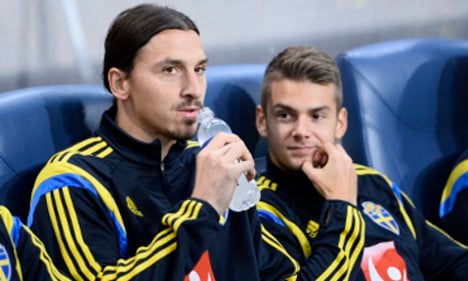 His coach at club side Paris Saint-Germain coach said on Friday that Ibrahamovic was recovering well from his heel injury but admitted the Swede will miss Saturday's Ligue 1 trip to Lorient.

"He is feeling a lot better, not enough to enable him to train with the rest of the squad or for him to be in the squad tomorrow but there are some positive signs," said Laurent Blanc at a press conference.

"Yesterday and the day before were rare days where he did not feel any pain. I see that as a positive sign and he is quite satisfied himself."

PSG face APOEL of Cyprus in the Champions League next week and then host Ligue 1 leaders Marseille on November 9, but Blanc suggested that the Swedish striker will not be ready to return until later in the month.

"We have waited four weeks, we can wait another week or 10 days. He is starting to feel the time dragging, but as long as that pain was there he could only work on his own and he couldn't just do anything.

"Once there is no more pain, he can start to work more intensively."

Ibrahimovic, the leading scorer in Ligue 1 in each of the last two seasons, has not played since the 1-1 draw with Lyon in late September.

Earlier this week the star striker was nominated for FIFA's Ballon D'Or prize, one of the most prestigious awards in football. But pundits suggest his absence from recent games means he is unlikely to win this time.

His Paris coach Laurent Blanc has no doubts that he will quickly rediscover his full fitness.

"He will quickly get back to his previous level because he has worked. He has been on the bike and done exercises to keep up his fitness," said Blanc, whose side come into the weekend in second place in the table, four points behind Marseille.

Sweden's next Euro 2016 qualifier is against Montenegro on November 15th.