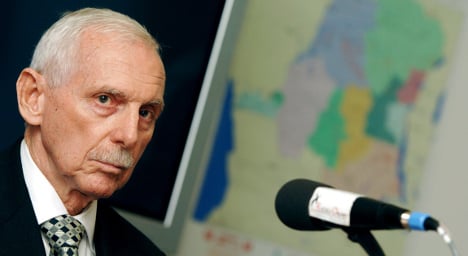 "Boat arrivals to Europe are a result of the complex humanitarian crisis near Europe's external borders, not of the humanitarian life-saving policies that try to assist those in need," IOM chief William Lacy Swing insisted.

His comment came after Britain earlier this week charged that Italy's Mare Nostrum operation, which has rescued some 150,000 migrants in the Mediterranean in the past year, had created "an unintended 'pull factor'".

Immigration Minister James Brokenshire warned Thursday that the operation – a large-scale deployment launched a year ago after two deadly shipwrecks – had encouraged traffickers to place "more vulnerable people in unseaworthy boats on the basis that they will be rescued and taken to Italy."

He claimed that the operation, which is now ending, had had the "unintended consequence of placing more lives at risk".

But Swing insisted the rescue operations in the Mediterranean were a life-saving necessity.

"This is not a crisis of a so-called excess of migrants overburdening the continent, but an emergency of more people needing protection, aid and safe migration channels," he said.

The United Nations refugee agency agreed, with UNHCR spokesman William Spindler pointing out on Friday that the surge in migrant numbers had begun before Mare Nostrum was launched last year.

"You can't say that the increase in numbers of people is a consequence of Mare Nostrum. In fact it's the opposite. Mare Nostrum came as a response to the dangerous conditions in which people were travelling across the Mediterranean," he told in reporters in Geneva.

An estimated 3,200 people have died so far this year trying to cross the Mediterranean, many of them "victims of ruthless criminal gangs seeking to profit from the misery of men, women and children fleeing conflict and oppression," IOM said.

The EU is set to launch a patrol mission in the Mediterranean on Saturday.

But it will not be a rescue operation that ventures beyond European territorial waters, giving rise to fears that many migrants will be left to drown after Italy pulls the plug on Mare Nostrum.

"At a time when countries in North Africa, the Middle East and East Africa are hosting millions of displaced persons, compared to a few hundred thousand in all of Europe, the European reaction should be balanced and compassionate," he said.