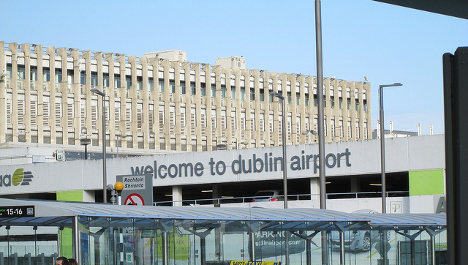 Roberto Binaschi was arrested after getting off an Aer Lingus flight at Dublin airport. Nate Eagelson

Roberto Binaschi, 56,  wrote the words "Attenzione Ebola" on the lid of a disposable coffee cup as a prank on his daughter during an Aer Lingus flight from Milan to Dublin on Thursday.

When a member of the cabin crew spotted the words on the lid in the waste bin, it triggered an alert.

IT businessman Binaschi, who was travelling to a conference, was asked if he had written the words. When he said he had, the cabin crew alerted the authorities at Dublin airport.

Binaschi, his wife and daughter were all arrested after emergency protocol was enacted at the airport and a cordon placed around the plane, which was carrying 142 passengers.

At the District Court in the Irish capital on Friday, Binaschi apologised and said he never intended to cause concern.

"My daughter ordered a cup of coffee and I drank from it before she did," Binaschi told the court, local media reported.

"Knowing the fact that she is quite keen on cleanliness, I took one of the pens she was using to study and wrote that sentence and I put the cup in front
of her."

Judge Anthony Halpin said: "It cannot be described as anything but a sick joke".

He compared it to writing on a napkin that there is a bomb on the plane.

Binaschi pleaded guilty to using threatening, abusive or insulting behaviour on board an aircraft.

The judge ordered Binaschi to pay his fine to a Catholic charity for homeless people in Dublin.

Nations are on high-alert as the number of Ebola infections in the current epidemic has surpassed 13,000 and the death toll nears 5,000 worldwide.