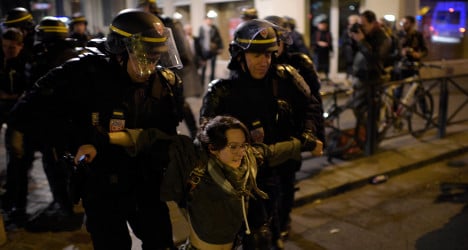 Police made dozens of arrests at a protest Wednesday in Paris. Photo: Martin Bureau/AFP

Fresh clashes broke out overnight in Paris between police and activists protesting over the death of a young man who was killed during a demonstration against a controversial dam project.

A group of around 250 people gathered late Wednesday outside the City Hall in Paris, with some hurling missiles at police and scrawling "Remi is dead, the state kills" on walls.

Remi Fraisse, 21, was found dead in the early hours of Sunday morning as people protesting against the project in the southwestern Tarn region clashed violently with security forces. It was the first such protest death in mainland France in nearly three decades.

Initial investigations into the case showed there were fragments of TNT on his clothes, suggesting his death may have been caused by a police concussion grenade.

The death has put pressure on President Francois Hollande's already unpopular government and there have been calls for Interior Minister Bernard Cazeneuve to step down.

Cazeneuve told French radio on Thursday there would be "punishment" if it turned out that "mistakes had been made" by the security services. However, he stressed that "all the facts" needed to be known before pronouncing judgement.

"A judicial inquiry is underway. The justice system needs to be provided with all the elements necessary to reveal the whole truth," Cazeneuve said.

Hollande has vowed to ensure personally that the truth of the incident comes to light. The death has thrown the future of the dam project into doubt, with local authorities saying they were considering "suspending work but not indefinitely".

Ecology Minister Segolene Royal said Wednesday a meeting would take place next week to discuss the future of the Sivens dam. Those opposed to the project say the dam will destroy a haven of biodiversity and will only benefit a small number of farmers.

Those promoting the project, meanwhile, retort that the dam is in the public interest as it will ensure irrigation and the development of high-value crops.