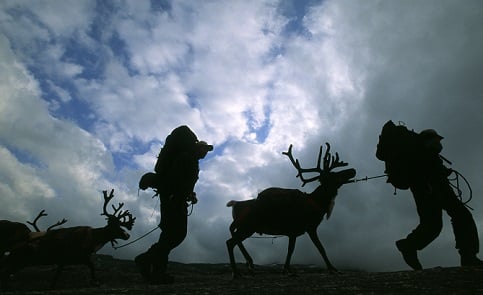 Karesuando. It may sound like an obscure martial art – and you'd be right about the obscure part, at any rate. With a population of just 300 at last count, Karesuando is the northernmost settlement in Kiruna – the northernmost municipality in Sweden.

“It’s just about as far north as you can get,” Peter Siikavuopio tells The Local, in a lilting accent reminiscent of Finnish.

Indeed, Karesuando is located right on the border of Finland – literally. One side of the icy river is Sweden,  but cross the bridge in the middle of town and you’ll be in Finland. The village is traditionally Finnish-speaking, although this side of it has been part of Sweden for 200 years.

When The Local catches up with Siikavuopio he has just returned from a walk in the woods – never mind that it’s -7 degrees and snowing. For him it’s just an ordinary day.

”I’ve been out looking for materials,” Siikavuopio explains. “Pretty much everything comes from the forest. The reindeer are always dropping horns.” Siikavuopio, a trapper by trade, is descended from the Sami, the indigenous Finno-Ugric people of the Arctic. And the Swede is an active producer of traditional Sami handicraft – slöjd.

“I’ve always been interested in the craft. It’s just what you do up here. And when you live this far out into the wilderness, there’s not much to choose from,” he jokes.

Siikavuopio owns and runs Trapper Produkter, which sells everything from Sami knives and axes to reindeer-skin backpacks. And of course a few tamer items, such as butter knives, hip flasks, and traditional Sami jewellery.

Although many of his products are made according to traditional Sami handicraft, Siikavuopio said he doesn’t identify himself as Sami.

“It's a sensitive issue up here, and some people want to be called Sami, and others Kvän,” Siikavuopio explains, referring to an ethnic minority descended from Finnish peasants centuries ago.

“But I'm a northern craftsman and a trapper, nothing else,” he says. A selection of Trapper Products. You can find many of them at The Local Brands.

In addition to selling his products online, he opens his small shop in Karesuando every winter, welcoming a flood of English and French tourists that continues all season long.

Since he started his company in the 1990s, growth has been steady, and the Trapper Produkter brand is one in the most-sold on The Local Brands webshop. But Siikavuopio says he’s in no rush to expand.

“Not all companies need to be these mega massive things,” he explains serenely. ”I can live off of it, and I’m content. And I have time left to go walk in the woods, and spend time with my family.”

His personal favourites are the hand-made bracelets made of reindeer skin.

”They’re very traditional; they’ve been made like this for several hundred years,” he says. “The bracelet itself is reindeer skin, and the button fastener is reindeer horn. They’re very unique.” Each bracelet takes at least an hour to complete, Siikavuopio says, depending on the design.

“There aren't many people who do this anymore, and certainly not many who make a living off of it. But I do.”

Reindeer horn is just one of many easy-to-find materials in the northern forests, and the skins are purchased from local traders, Siikavuopio explains.

“Norrland is in these products,” he says. “They’re made right here. Nothing is imported. It’s traditional slöjd from the woods”. SAMI
‘Never have I seen so few old trees around’: What’s happening to Sweden’s forests?

The skeleton came from a Sami from the village of Arjeplog in Sweden’s northernmost Norrbotten county, who was serving a life sentence at Stockholm’s Långholmen prison when he died. The skeleton had been on display at Gustavianum, Uppsala University’s Museum.

“The government has today decided that Uppsala University should be able to return human remains, in the form of a mounted skeleton, to the Arjeplog Sami association,” the government said in a press release.

“The university’s request has been prompted by a request from the Arjeplog Sami association requesting the repatriation of the remains. Uppsala University has determined that Arjeplog’s Sami association has a legitimate claim on the remains and that the association will be able to ensure a dignified reception.”

Sweden’s universities and museums have been gradually returning the Sami remains and artefacts collected in the 19th and early 20th century when research institutes such as Uppsala’s State Institute for Race Biology, sought to place Sami below ethnic Swedes through studying eugenics and human genetics.

Lund University returned Sami remains earlier this year, and in 2019, the remains of more than 25 individuals were returned by Västerbotten Museum to Gammplatsen, an old Sami meeting place on the Umeå River in southern Lapland.

Mikael Ahlund, chief of the Uppsala University Museum, said that the skeleton was one of “about 20 to 25” that the museum had been given responsibility for in about 2010, when the university’s medical faculty was clearing out its old collections, and had never been put on display.

He said it was “a bit unclear how these remains were collected and how they were used”.

“It’s a complex history at the end of the 19th century, with teaching anatomy. They also had a connection to the ideology of the period, the idea of races and the different anatomy of races, so that’s the dark shadow of that period.”

In a press release last November, Margaretha Andersson, the head of Uppsala’s Museums, said that in 1892, when the man died, there was nothing strange about prisons donating the bodies of dead prisoners to university medical departments.

“In the old days, it was not unusual that the bodies from people who died in prison were passed to the university’s medical and research departments,” she said.

Ahlund said that the museum had always been willing to return the skeleton to the Sami association, but that there had been bureaucratic hurdles to doing so.

“What you need to know is that we are Swedish government institution, so we can’t just repatriate them as we would like ourselves, it needs to be a decision from the government, which is what happened today.”

He said that the skeleton would be delivered to Arjeplog “as soon as possible”. “We expect it to happen early autumn, or something like that.”