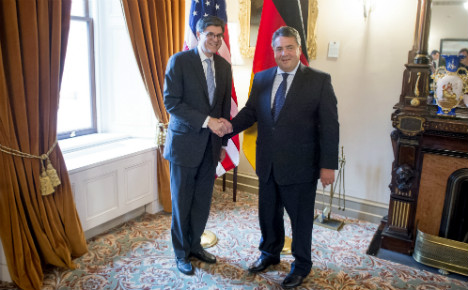 Lew and Gabriel, who met in Washington, discussed the slowdown in global economic growth and particularly in the 18-nation eurozone.

The Treasury chief "emphasized the importance of strengthening public investment, and urged German and other European leaders to boost domestic demand as part of an appropriate fiscal, monetary, and structural policy mix," the department said in a statement.

Recent data has suggested that the German economy is stalling, threatening to pull the eurozone back into recession and put the brakes on the global recovery.

The German government has made it clear that most investment should come from private rather than public funds.

Last week Gabriel insisted that Germany sees "no reason to abandon or change our economic or fiscal policy" despite increasing calls within Germany and in other neighboring eurozone countries to increase public spending to boost growth.

The Treasury also said that Lew and Gabriel discussed the situation in Ukraine, where a raging conflict with pro-Russian separatists in the east has killed more than 3,700 people.

The two officials agreed on the importance of a united front between the United States and the European Union on sanctions against Russia "in response to its destabilising actions and continuing refusal to fulfil its commitments under the terms of the September 5 Minsk Agreement to advance the peace process in eastern Ukraine," the Treasury said.

On September 5 in Minsk, after separatist victories in Ukraine that were allegedly helped by Russian special forces, both sides signed a 12-point ceasefire deal that since has been regularly breached.