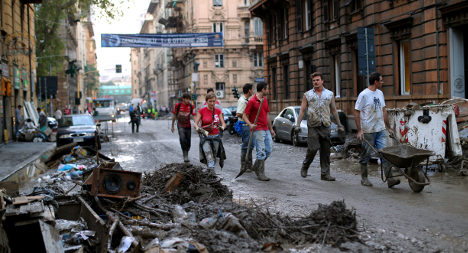 Workers carrie mud from flooded streets in Genoa. a day after one person died when flood waters swept through the city. Photo: Marco Bertorello/AFP

Italy have yet to play Albania but will meet them on November 18th, two days after facing Euro 2016 qualifying rivals Croatia in a crucial Group H clash in Milan.

The match was scheduled to be held at the Enio Tardini stadium of Serie A side Parma, but has been moved by FIGC president Carlo Tavecchio to boost the city of Genoa, which has been hit by heavy flooding in recent days.

Croatia top Group H after three games with Italy, the only other unbeaten side in Group H, also on nine points, three ahead of Norway and six ahead of Bulgaria.