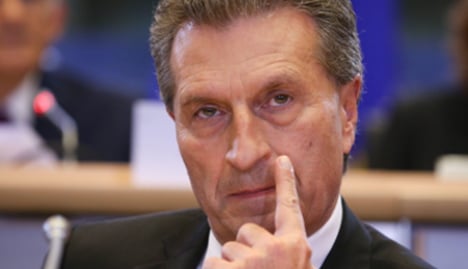 Günther Oettinger, formerly energy commissioner, will formally take charge of the digital portfolio starting November. But he has clearly always had his finger firmly on the digital pulse – sometimes even adding appointments to his iPhone calendar himself, he told the Passauer Neue Presse.

The Internet could provide such “relief”, Oettinger said, fulling putting fears to rest that he was unqualified for his position.

"If I'm searching for information, I look online," he added. "I'm online every day."

As early as September, he warned a public less net-savvy than himself that it was “stupid” to share naked photos online, after thousands of nude celebrity photos leaked onto the internet.

In a recent European Parliament hearing centred on the risks of digitization, he said: “If someone is stupid enough as a celebrity to take a nude photo of themselves and put it online, they surely can’t expect us to protect them.

"Stupidity is something you can only partly save people from."

Netizens have taken to discussing the designated commissioner’s exploits – digital or otherwise – under the hashtag #OMGoettinger on Twitter.

Oettinger has faced ridicule in the past after a video of him reading a speech in less-than-perfect English went viral in 2010 – which would not have been so bad, had he not publicly made an impassioned plea on the importance of speaking English shortly before.