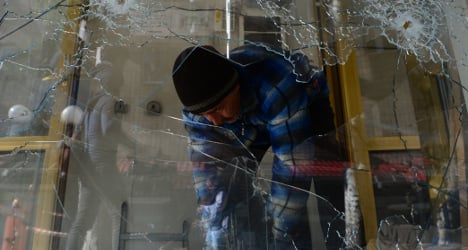 A worker cleans up glass at the ICRC office in Donetsk after the explosion that killed an employee. Photo: John MacDougall/AFP

"We are still deeply shocked by the death of our colleague Laurent Du Pasquier…. We are grieving," said Dominik Stillhart, director of operations at the International Committee of the Red Cross.

DuPasquier, 38, was killed on October 2nd when a shell slammed down outside the ICRC headquarters in the restive eastern city of Donetsk.

His body arrived back in Switzerland on Thursday.

The organization immediately suspended all of its operations in the country, where it counts some 50 mobile and 150 local staff members, but remained "fully committed" to resuming its work, Stillhart told reporters in Geneva.

"Our operations will continue in Ukraine," he said, adding though that "I can't yet say when we will resume."

He said that two high-level ICRC officials were currently in Ukraine to evaluate the situation.

"We need to ensure that our people can operate in safety and security, and… we need to review our security dispositive in order to decide where we can go and what we can do," he said.

He stressed that the question was not whether the organization would resume its operations, but how.

Six months of fighting has already killed nearly 3,400 people across the mainly Russian-speaking east of Ukraine and left nearly 8,200 wounded, according to fresh UN numbers.

The ICRC is particularly concerned about the more than half a million people who have been displaced by the fighting, fleeing inside Ukraine and also across the border to Russia, especially since "winter is approaching fast".

"Before the tragic incident… we were just in the process of starting a winterisation programme," he said, pointing out that winters are usually harsh in Ukraine and that displaced people will need help to make it through.

A one-month truce is meanwhile teetering on the verge of collapse, with more than 330 people killed since it was signed on September 5th.

Stillhart warned the ceasefire was "extremely fragile," especially in the areas around Donetsk and Lugansk, where the ICRC had the bulk of its operations.

He acknowledged that when operations in Ukraine resume, the ICRC may not immediately be able to return to some of the most dangerous areas.

ICRC had "duly notified all parties" the location of its office in Donetsk he said, underlining that the attack that killed DuPasquier was "a serious incident".

"We have asked the (Ukrainian) authorities to investigate," he said. He added that he had no information about who was behind the attack.

The ICRC meanwhile appealed Thursday to its donors for more funds to cope with the multiplication of crises around the world.

Stillhart said the organisation had set its annual budget at a record 1.3 billion Swiss francs ($1.36 billion, 1.07 billion euros) this year, of which it was still 132 million francs short.

For its Ukraine operations, the ICRC needs another 15 million Swiss francs, he said.