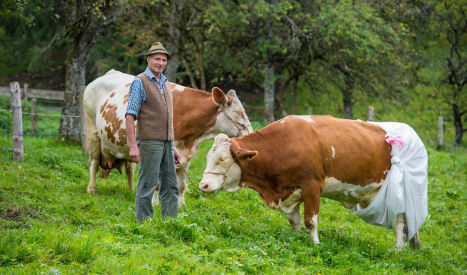 The Bavarian Farmers Association (BBV) is calling foul on new rules proposed by the European Union Commission to ban cow dung from hillsides with a gradient more than 15 percent. The goal is to avoid water pollution by stopping nitrates from leeching into ground waters.

"We demand that Germany stops this ban," said Upper Bavaria BBV president Anton Kreitmair at Wednesday's protest. "Slurry and dung are not pollutants, but valuable fertilizers."

The protest had no placards or slogans – just Doris the cow, wearing a plastic sheet tied around her rear end by farmer Johann Huber.

"We have no regular Pampers, the stores don't sell any big enough," Huber joked as he set about his task.

Doris and her colleagues graze almost exclusively on areas that would be forbidden under the EU rules in the town of Gmund, on hills above the Tegernsee.

The new regulations would essentially restrict cows to grazing in the valleys of Bavaria's alpine farms.

"In Bavaria alone, more than half of vineyards would no longer be able to fertilize with cow dung and 10 percent of the fields and meadows would no longer farmed," said Kreitmair, explaining it wouldn't just be farms like Huber's affected.

Huber says his family farm, which has been in busines since 1590, is already being subsidized by tourism – they have nine beds to boost income on the farm.

"Mountain farmers have a major role in ensuring that the alps are one of the most sought-after travel destinations. Federal and state politicians need to ensure that the conditions continue to allow farmers to meet their many social duties," Kreitmair added.

Steffen Schulz, spokesman for the EU Commission in Munich, said that many German waterways are already over the acceptable limit of nitrate contamination through over fertilization.

Huber said that if the EU Comission's rules were to pass, he wouldn't be diapering his cows before they go out to graze.