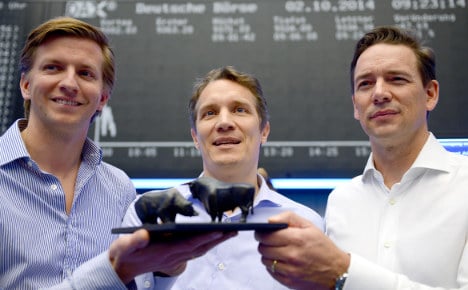 It was more of a bear than a bull market for Rocket Internet co-founder Oliver Samwer (centre). Photo: DPA

Shares were initially priced at €42.50, giving the company a total valuation of €6.7 billion, but fell to less than €37 in the first minutes of trading.

However, prices recovered over the first hour to reach €41.54 after more than five million shares had been traded.

Around 24 percent of the company's shares will eventually be traded on the stock market.

"Our business takes the long view and our investors are the same."

Rocket made its IPO the day after German online retailer Zalando.

The appearance of the clothing store on the stock market was heralded as another milestone for the German technology industry.

It become the biggest flotation yet of a German online business, but disappointed as the shares fell to €20 in Thursday morning trading from their Wednesday price of €21.50.

It was unwelcome news for Rocket bosses Oliver, Marc and Alexander Samwer, who own around 15 percent of Zalando between them.

Nurturing Europe's largest online fashion retailer to maturity has counted as one of Rocket's greatest successes.

The company, founded in 2007, invests in startups all over the world and seeks to build them into profitable businesses.

American businesspeople have often accused it of copying business ideas from Silicon Valley.

It currently has investments in 66 companies worldwide with a total of around 20,000 employees.