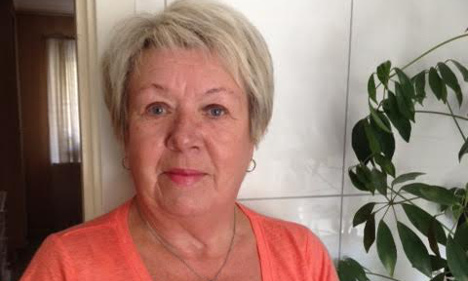 Ing-Marie Olofsson whose necklace was found. Photo: Private
When pensioner Ing-Marie Olofsson was a teenager, she regularly went out swimming in the Lillsjön lake in southern Sweden.
Around her neck she wore a silver "lucky coin" that she had been given at birth. But one fateful day, Olofsson returned from a swimming class without the necklace.
Lost but not forgotten, the jewellery stayed on the lake bed until recently, when Joakim Backler was out in the same lake.
"I was out fishing in the lake there and I got a little nibble from the deep," Backler told The Local.
"But when I reeled it in, I was shocked. It was a little silver pendent and chain. I couldn't believe my eyes."
He said the name and birth date were still legible, and his own mother had no trouble tracking down the original owner – even though she'd moved to another town.
"It's not every day you get a call like that," Ing-Marie Olofsson told The Local.
"I couldn't believe my ears. I remember losing it, of course, and I remember going back and looking for it for a good few years. But I must be honest – it's been 52 years and it hasn't crossed my mind so much lately."
She has already taken the coin, which is engraved with a four-leaf clover on the back side, and left it with a goldsmith who will turn it into an armband.
Meanwhile, Backler says he plans to keep fishing whenever he gets the time.
"I've got a lot of nibbles before but I've never caught something like this," he told The Local with a hearty chuckle.
The find isn't the first of its kind in Sweden. In 2011 a woman pulled up a carrot which had grown through her wedding ring, lost six years before.