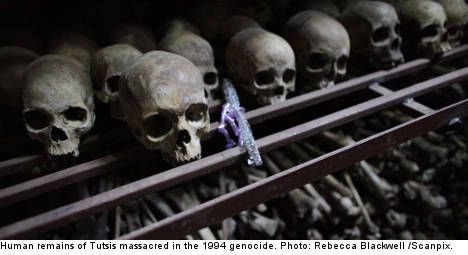 "Only one of the two men has been detained, but an investigation concerning both of them is underway," Tora Holst, prosecutor in charge of the probe, told AFP.
The men, whose identities have not been revealed, deny the allegations that they participated in the genocide.
According to the UN, some 800,000 people died in the Rwandan genocide, which began after the assassination of Rwanda's Hutu president Juvenal Habyarimana 20 years ago.
The suspect remanded in custody was born in 1955 and is a Swedish citizen, while the other, born in 1962 is a Rwandan national who lives in the northern city of Luleå.
Under Swedish law a suspect can be remanded in custody while a prosector gathers evidence to bring charges.
In June, a Swedish appeal court upheld the first genocide conviction in the country's history, with a life sentence for Stanislas Mbanenande, a Swede of Rwandan origin.
The 55-year-old engineer, who worked as a teacher in his country, was found guilty of playing a leading role in five massacres committed in western Rwanda.
The appeal court said the conviction was based on a large number of reliable testimonies, including interviews with witnesses of some of the
massacres. Mbanenande has denied all of the accusations.
"The investigations have nothing to do with this affair," Holst told AFP on Wednesday.
Other Rwandans have been convicted in Canada, Finland, Norway and the Netherlands for their involvement in the Rwandan genocide.