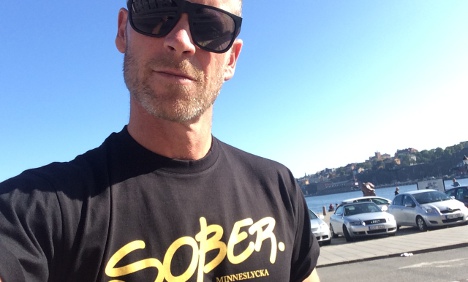 New club night Sober opens at the Sodra Theatre in Stockholm this week and as its name suggests, all ravers will be required to dance the night away without a drop of booze inside them.

There will be breath tests on the door. Staff trained to spot people who are on drugs will also be booting out clubbers who have turned to alternative stimulants.

The monthly event is taking place on Södermalm, recently voted the hippest place in Europe by Vogue magazine. But should we believe the hype?

1. How did you come up with the idea?

I stopped drinking a while ago and started feeling great and so much healthier. I still went out clubbing and had plenty of fun, but I realised that after a certain time in the evening it wasn't fun any more. Swedes like to get hammered at the weekend. But I started to get to know so many cool people who also didn't drink alcohol so I wanted to create an experience for those people. Something that wasn't sitting at home watching TV, but didn't involve drinking fizzy drinks usually meant for teenagers surrounded by drunk people. The new club night will have lots of sophisticated non-alcoholic cocktails and we have attracted international DJs.

2. But Swedes are known both for being shy and for loving a drink. Will it really work?

It will be an interesting social experiment. In one word, I think it will be scary. But I think people will still talk to each other and flirt. I have carried on doing that since I stopped drinking. There is a trend towards healthier lifestyles in Sweden. It is not just about going to the gym any more, people are doing yoga and meditation and this is part of that. Also Stockholm is becoming increasingly multicultural and I think young people are being influenced by – for example – muslim friends who don't drink.

3. Still, wouldn't it have been easier to launch in a city with a more laid back or gregarious reputation? What about Barcelona, Sydney or London?

If it can work in Sweden then I guess it can work anywhere. And who says we are not launching elsewhere! I have had calls from people in the UK, Germany, Spain and Holland and I also think this idea would be a smash in Los Angeles, it really fits with the culture there. But I wanted to try it here in my own city first.

4. So what are your tips for Swedes turning up on Friday?

Just do it! I know I have borrowed that slogan from a famous brand but I do live by it. Just go over to somebody and ask them their name. Enjoy yourself and ignore that negative voice in your head telling you not to approach people or try something new.

5. We're still not convinced this is a sustainable business model? Won't people just try it once for a novelty night out and then move on to the next fad?

I don't think so, I think they will come back. But we do plan to limit the event to once a month or something like that so that people don't get bored. We are also planning to try other things like concerts and lectures where there is no alcohol. I know I sound like a new born Christian promoter! Actually, I have never said that I am not drinking forever. But for now I truly believe that there are so many great alternatives to getting drunk.