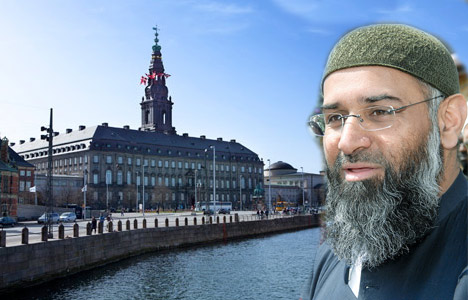 Choudary said Christiansborg should be renamed Muslimborg and should have the flag of Islam flying above it. Photos: Martin Hviid, Snapperjack/Flickr
A Muslim hate preacher who once called for Sharia law to come to Denmark was among nine people arrested in an anti-terror action in London on Thursday.
The BBC reports that among the men arrested was Anjem Choudary, who has spoken against Denmark on previous occasions.
In a June appearance on the DR programme Deadline, Choudary told host Martin Krasnik what he thought should happen to Denmark’s parliament building.
“Maybe Christiansborg should be renamed to Muslimborg one day and have the flag of Islam flying over parliament. It would be very nice,” Choudary said.
In the appearance, which can be viewed here, he also defended his controversial beliefs.
“I believe that adulterers should be stoned to death, I believe that we should cut the hand of the thief and Sharia should be implemented in Denmark,” he said.
He went on to say that it is “a reality” that Sharia law would one day come to Denmark.
The nine men arrested in London on Thursday were between the ages of 22 and 47, according to the BBC. They are suspected of belonging to a terrorist organization and of encouraging the spread of terror.
All nine men were taken to police stations in central London for questioning.
“These arrests are part of an ongoing investigation of terrorism related to Islam and are not a reaction to any immediate security threat,” police said in a statement.
Choudary is known as the most notorious hate preacher in the radical Islamist environment in England. For years, he has been one of the most controversial Islamists in the UK. It is there he established the organization Sharia4UK. He also has an extensive network in other European countries, including both Denmark and Norway.
Choudary recently told Norwegian newspaper VG about is connections to the extreme group The Prophet’s Ummah.
“I know people in The Prophet's Ummah, especially Ubaydullah Hussein, he is a good friend of mine. He has visited England and I have visited Norway.”
Choudary has expressed his support to the terrorist organization Isis and their atrocities committed in Iraq and Syria.
Choudary told VG that he has many supporters throughout Europe.
“I have connections in many countries throughout Europe, but there are no administrative connections. To say it like this – there are no divisions of a movement. But you never know: maybe one day I'll come to Norway to live,” he said.
Choudary was born in England to Pakistani parents.