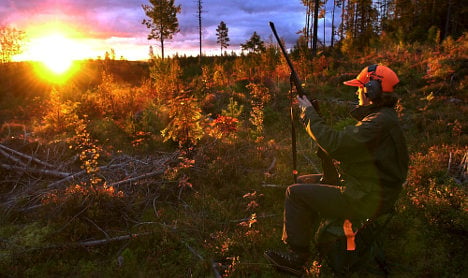 As hundreds of thousands of hunters head for the forests of Sweden, insurance firm If expects around 100 people to hurt themselves so badly that they qualify for compensation payouts.

“Cuts, crushes and fractures are the most common injuries,” said If spokesman Matts René.

“A lot of hunting takes place on uncleared terrain where there’s plenty to stumble on.”

“Hunting towers can be in varying condition. We’ve had cases where people have gone through the floor three metres up in the air,” said René.

As for the number of hunters who inadvertently cut themselves, Hans Geibrink from the Swedish hunting association said he wasn’t surprised.

Deaths among hunters are fortunately quite rare; the number of hunting-related deaths has dropped since Sweden introduced a hunting-licence test in the 1980s.

On September 1st, however, the first day of the hunt in northern Sweden, a stray shot killed a hunter near Kristineberg, 800 kilometres north of Stockholm.

Hunting association statistics show that the number of deaths each year generally ranges from none to two.

“Our goal is for it to be zero,” said Geibrink.

“But considering how many hunters are out there and the number of shots that are fired, the Swedish hunt is safe.”

Hunting season in the south of the country begins on the second Monday in October.