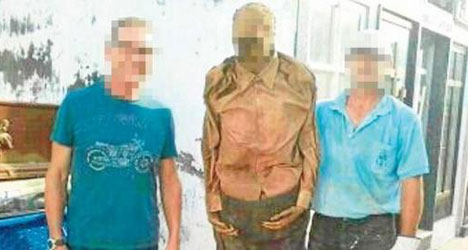 The photo was shared by family members of the deceased but town hall officials described the act as "silliness". Photo: Twitter

The mummified body of a man who died 23 years ago had been moved from his grave to allow the burial of his wife alongside him in the family tomb in Guardamar del Segura.

The niece of the deceased had arranged for the grave to be extended. Clemente, the gravedigger, opened the tomb to begin his usual job of breaking up the corpse to allow another body to fit into the same space.

For reasons unknown, the niece then took a photo on her mobile of Clemente holding up the body alongside another man, said to be the corpse's nephew by marriage, who is grinning broadly.

According to Spanish daily Información, the woman then sent the photo so a third family member via WhatsApp.

From there it was rapidly shared and posted on social media.

The local town hall became aware of the photo, which shows Clemente wearing his official blue polo shirt, lightly covered in dust from the body, emblazoned with the town's coat-of-arms.

A spokesperson said, "It was silliness with no justification whatsoever and we will have to take a decision."

The case has been referred to the civil guard and Clemente has been suspended from his normal duties and assigned to other tasks.