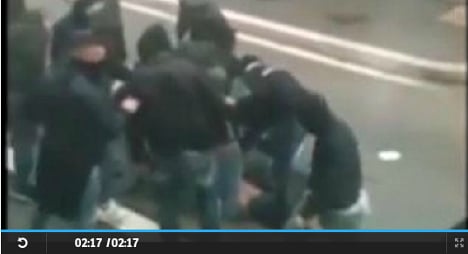 In the 150-second clip (see below), which was released by the lawyer of Ciro Esposito’s family, Angelo Pisani, two gunshots are heard and an injured Ciro Esposito is seen being dragged away from the place where he was shot by fellow Naples supporters.

Later in the video, a police car arrives at the scene and a plainclothes officer steps out.

The clip was filmed by football fans on a mobile phone while on board a bus. The video was then given to Esposito’s father who then gave it to police.

Speaking to a Naples-based paper, Giovanni, Esposito's father, said it took an hour for the ambulance to arrive.

The family’s lawyers are hoping that the video will be a key piece of evidence to establish the truth about what happened, Tgcom24 reported.

Ciro Esposito, a 29-year-old Napoli fan, was shot outside Rome’s Olympic Stadium ahead of a football match between Napoli and Fiorentina on May 3rd.

He died on June 25th after his condition deteriorated unexpectedly following a lung operation on June 19th.

Daniele De Santis, a 48-year-old AS Roma fan, is currently being investigated for manslaughter.

A well-known member of the hardline ‘Ultras', an organized group behind much of the violence surrounding Italian football, De Santis is also accused of shooting two other Napoli fans before the game, which was delayed by 45 minutes.

Reports following the attack suggested De Santis, nicknamed Gastone, provoked the group with smoke bombs, and when they responded badly he pulled out a gun and started shooting.

Hardline Napoli supporters have pledged to get revenge against the “Roman bastard” who shot Ciro Esposito.

They said the person responsible for shooting Esposito “would pay, sooner or later”, according to reports in May.

The violent attack is one of the worst seen in Italian football, but some say the authorities, despite pledges, have never really tackled the problem of hooligans.

“Soccer has long been a free zone, with no law, or rather without the state’s law – that of criminals and thugs has its full jurisdiction,” Maurizio Crosetti, a sports journalist, wrote in La Repubblica in May.

WARNING – Some viewers may find this video disturbing.