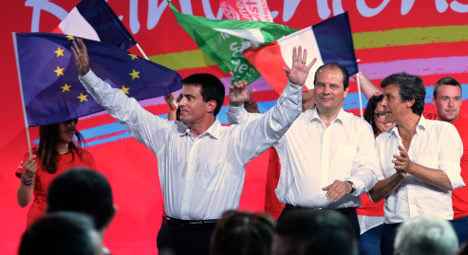 Does the French PM Manuel Valls remind you of anyone? A younger Tony Blair perhaps? Photo: Jean-Pierre Muller/AFP

Splits in France's ruling Socialist Party, which sparked an emergency government reshuffle last week, continue to widen as members on the left flank snipe at Prime Minister Manuel Valls, who they see as attempting a "Tony Blair"-style lurch to the right.

President Francois Hollande's party, meeting this weekend to plot their strategy for the coming year, is embroiled in a crisis that mirrors that of France as a whole, weighed down by stagnant growth, record-high unemployment and an unpopular leader.

Around 40 rebel MPs, known as the "frondeurs", have gathered around former Economy Minister Arnaud Montebourg to criticize the government's economic policy and what they see as a shift to the centre ground of French politics.

Valls did his best to try to quell any rebellion by calling for unity against a common enemy in his speech to party followers in La Rochelle on Sunday.

"If there's to be a political confrontation. If there's a debate to have, it's not at the heart of the Socialist Party, it's not among the left, it's with the right!" Valls told party followers.

"What unites us must be stronger than our differences," he added. The PM also urged followers to "pay attention to their choice of words, behaviour and attitudes".

He also urged party members to get behind the unpopular president. "The head of state deserves our affection, our support and our loyalty," he said before finishing his speech with "long live the left, long live the Republic and long live France".

His words came after Hollande urged Socialist MPs to give him a majority in the National Assembly and not rebel against the government.

Valls prompted widespread anger among the rebel MPs this week when he received a standing ovation from business leaders after declaring his "love" for companies in a speech seen as too right-wing for a Socialist leader.

Socialist MP Laurent Baumel grumbled it was a "copy-and-paste" from speeches made by former British prime minister Tony Blair, who moved his centre-left Labour party to a more pro-business, centrist agenda in the 1990s.

The speech marked an "ideological break from everything we have believed in on the left for decades," complained Baumel.

Deepening rebels' anger was the fact that the replacement for the left-wing Montebourg was a former Rothschild banker, Emmanuel Macron, who promptly cast doubt on a cherished policy of the French left, the 35-hour working week.

The crunch will come either in September or October when Valls submits his work programme – notably a policy called the Responsibility Pact that offers tax breaks to businesses in exchange for jobs and deep public spending cuts – to a parliamentary vote of confidence.

Observers believe it is unlikely the rebels will choose to vote against Valls, a move which would make a dissolution of parliament "inevitable", according to political analyst Philippe Braud.

"The risk that Manuel Valls is taking is a calculated one. He has burned his bridges but if, in the long-term, the reforms bear fruit, he will also have achieved a cultural revolution on the left," Braud told AFP.

On Sunday, Valls attempted to pacify the rebels declaring his "love" for the Socialists in a deliberate echo of his business lobby speech.

But some militants interrupted the beginning of his address with shouts of "long live the left" — which has become the rallying cry of the "frondeurs."

Despite their anger, few wish for early elections given that Hollande is the most unpopular president in modern history – recent polls put support at around 17 percent – and that a snap poll could lead to further strides for the rampant far-right National Front party.

Fresh elections would result in a "cataclysmic rout for the Socialists" predicted Braud.

Party leader Jean-Christophe Cambadelis told delegates at the Socialists' gathering at the weekend that he would "guarantee the ability to debate, but I will not accept that these debates aim to bring down the government."

The saving grace for the Socialists is that the centre-right opposition party, the UMP, is also struggling for unity.

Two party heavyweights, former prime minister Francois Fillon and ex-foreign minister Alain Juppe, have already declared they will stand against Hollande in the next presidential election in 2017.

But waiting in the wings is former president Nicolas Sarkozy. He has hinted at a possible return to French politics and could declare his intentions in the coming weeks.

Given Sarkozy's popularity among the UMP rank-and-file, "his chances are extremely good, unless there are legal difficulties," said Braud, a reference to the former head of state's judicial trials and tribulations.

With France in a deep political and economic crisis, the only party that appears to be united is the resurgent National Front, whose leader Marine Le Pen has unsurprisingly called for new elections as soon as possible.