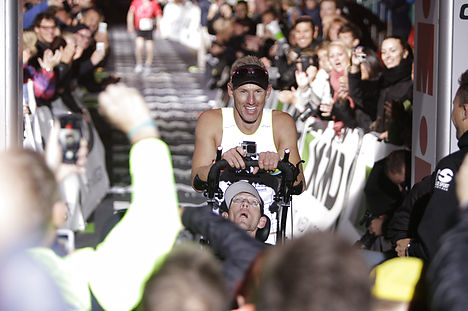 Steen and Peder Madrup completed the KMD Ironman Copenhagen contest on Sunday less than 20 minutes before the cut-off time. Photo: Simon Skipper/Scanpix
Twin brothers Steen and Peder Mondrup carved out a spot in the history books at the KMD Ironman Copenhagen on Sunday.
Competing together as Team Tvilling (Team Twin), Peder become the first person with cerebral palsy to compete an Ironman competition.
See photo gallery here: Team Tvilling makes history at Ironman Copenhagen
Team Tvilling crossed the finish line after a 15 hour, 32 minute and 48 second display of iron will and brotherly love. Steen successfully completed a 3.8 km swim pulling his brother in a raft, cycled 180km in a specially-created bike and completed a full 42.2km marathon while pushing Peder in a wheelchair.
The duo arrived at the finish area at Christiansborg Palace ahead of the 11pm time cut-off, where they met a rousing greeting from cheering supporters.

Team Tvilling during the marathon leg of the KMD Ironman Copenhagen on Sunday. Photo: Simon Skipper/Scanpix
Steen and Peder Madrup were born three months early in January 1980, weighing just 1,200 grammes each. Peder suffered from a lack of oxygen during the birth, resulting in a life confined to a wheelchair with cerebral palsy.
But that has hardly limited him. Peder has been an active spokesman for the disabled and is involved in several different clubs and organisations.
Steen has always been interested in various sports and in 2013 he decided that he should complete a half marathon with Peder, who thought his brother was crazy. Crazy or not, the Mondrup twins completed the half marathon in 2 hours and 16 minutes and went on to compete in increasingly difficult contests, culminating in Sunday’s historic effort at Ironman Copenhagen. Steen and Peder Madrup complete the swimming portion of the KMD Ironman Copenhagen contest on Sunday. Photo: Bax Lindhart/Scanpix
“For the first time, I felt like the person I see myself as: a regular participant instead of ’somebody in a wheelchair’,” Peder said of their first race.
“If I can give Peder the feeling of not sitting in a wheelchair for a few hours, then I will do whatever it takes! I feel like I am really lucky because he has caused me to see the positive in life and to not complain about everyday things. One thing is certain and that is that you never have and never will hear Peder feel sorry for himself,” Steen said on their website.
“As we have always said: Steen got the legs and Peder got the brains, so we are the perfect combination for a runner with iron will,” the twins write on their website.