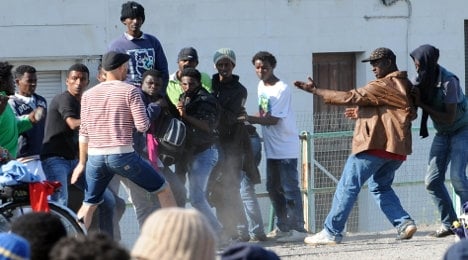 "The interior ministry shares with the family of the victim and Algerian authorities the very strong desire to shed light on the circumstances of this tragic death," the ministry said in a statement to AFP.

Abdelhak Goradia, 51, was being transported to a flight and due to be expelled from France last Thursday but died in mysterious circumstances after arriving at Charles de Gaulle airport, Paris.

A police source told AFP on Friday Goradia had "fallen ill in the van" and "died of a heart attack" after being given aid at the airport.

But according to initial autopsy results revealed over the weekend, "the cause of death was asphyxiation due to gastric regurgitation".

Family members who saw Goradia's body said there were bruises visible on his face.

"He had facial injuries but we could not see the rest of the body because it was hidden," Goradia's cousin said via telephone.

"He had a bruise on his nose and face," said his nephew, Hocine, also by telephone.

Goradia's family, about 20 of whom live in France, want to launch civil proceedings to determine the exact cause of death.

Algeria, meanwhile, has asked for "official and accurate information on the circumstances of the death".

France's interior ministry said that "justice alone would determine" the facts of the case.

Goradia came to France in 1996 with a visa but stayed after it expired, according to his cousin. In 2007 he was jailed for fraud and theft.

He was immediately detained this summer after serving his sentence, unsuccessfully appealing the decision to deport him from France.