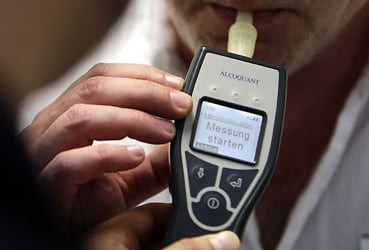 There were 285 drink driving related accidents in August alone last year, accounting for 12 percent of traffic accidents in 2013.

"If you are going to be driving, don’t drink, and whoever has been drinking, should not be driving," the Road Safety Board (KFV) appealed to drivers.

74 of the 285 alcohol-related accidents last August happened on a Saturday.

Most of August’s drink driving accidents occurred in Lower Austria, followed by Upper Austria and Styria.

Across the country, a total of 31 people were killed in alcohol-related accidents last year – and six of those deaths were in August.

"In Austria, almost one in ten road deaths are caused by a drink driver," said Rainer Kastner, a KFV traffic psychologist.

Drink driving is measured in blood alcohol, in the number of milligrams of alcohol per 100 millilitres of blood.

"For a person of average height with an average of five or six litres of blood it won’t make any difference if you’ve eaten a schnitzel or not – the volume of alcohol in your blood stays the same,” said Kastner.

Blood alcohol level is reduced at an average rate of 0.1 mg per hour – regardless of whether one sweats, sleeps, runs or drinks coffee, he added.

26,000 people annually lose their license due to drink driving in Austria, the majority of them men.

However, even a driver with a blood alcohol level of 0.5 mg per ml – the legal limit in Austria – is twice as likely to have an accident as someone who is sober. 0.5mg per ml is equivalent to one small beer.

And drivers with even lower blood alcohol levels can find it hard to claim compensation from insurance companies in the event of an accident, Kastner explained.

The limit for drivers who have held a licence for less than two years and drivers of vehicles over 7.5 tonnes is 0.01 mg per ml.