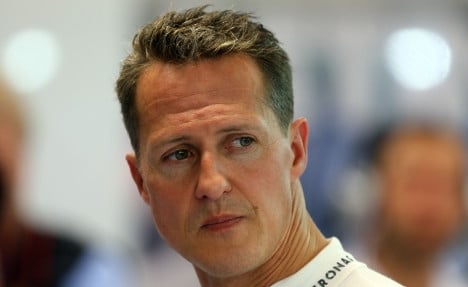 The man, whose identity was not disclosed, worked as an executive at a Swiss helicopter air rescue company, Rega, which organized the German sportsman's transport from a French hospital to Switzerland in June, the Zurich prosecutor's office said in a statement.

The suspect, arrested Tuesday and interrogated by police, had denied any wrongdoing.

He was being detained in a Zurich police holding cell, the statement said.

He was found hanged when officers came to bring him breakfast before a scheduled hearing before a judge.

According to an initial investigation, no one else was involved in his hanging, the prosecutor's office said.

Zurich police told AFP they had spotted no signs the man was mentally unstable or suicidal.

"Out of respect for human dignity, detained people keep their clothing in the cells," police spokesman Werner Schaub said, without revealing what the man had used to hang himself..

"There are also sheets in the cells, so there's always a risk that we cannot eliminate."

"We are at a loss for words and deeply shocked," Sabine Kehm, spokeswoman for Schumacher's family, told AFP in an email.

Schumacher sustained serious head injuries in a skiing accident at Meribel on December 29th and spent more than five months in hospital in the French city of Grenoble before being transferred to Switzerland in June 16th.

The former champion driver, long a resident of the wealthy Alpine nation, was brought by ambulance amid the utmost secrecy to a cutting-edge unit in the CHUV hospital in Lausanne.

But word soon got out that some of his medical records had been stolen and that the thief was attempting to sell them to different media for 50,000 euros ($67,000).

French prosecutors last month tracked down the IP address of the computer used in the theft of the medical records to Zurich-based Rega, which is the main operator of air ambulances in Switzerland.

The company confirmed that it had received a medical file to enable it to provide a medical opinion on the merits of the transfer operation, but denied any wrongdoing.

The firm followed in the footsteps of Schumacher's family and lodged a legal complaint against "persons unknown" in the case.

French police opened a criminal investigation and requested assistance from Switzerland, which had opened its own probe.

"We are deeply affected to learn . . . that a Rega employee, taken into custody yesterday upon suspicion of violating professional secrecy, committed suicide in his cell," he said in a statement.

"This tragic event leaves us saddened and speechless," he said.

"Our thoughts and sincere condolences go to the deceased's family and loved ones."

The Zurich prosecutor's office refused to reveal the man's age, nationality or other identifying factors.

But spokeswoman Corinne Bouvard told AFP the prosecution was fairly confident the man was the one who stole Schumacher's medical records and tried to sell them to journalists.

"There is very compelling evidence (that) it was he who tried to sell copies of Schumacher's medical records to different media," she said, adding that there was no indication he had any accomplices and that "the case should be closed."

In its statement, the prosecution authority stressed however that the man should be presumed innocent until proven guilty.

According to Swiss media reports, the data thief had exercised little caution.

He used the pseudonym "Kagemusha", or "Shadow Warrior", inspired by a Japanese historical film, the Tages Anzeiger daily reported in its online edition.

But he sent his offers to sell the medical documents, along with extracts of the records, via unencrypted emails from computers at Rega's offices, making it easy for police to track the IP address to the company, it added.

No media have ever published details from the stolen documents.

Schumacher remains in the Lausanne clinic, but little information has emerged about his condition since it was announced he had exited a six-month coma in June.