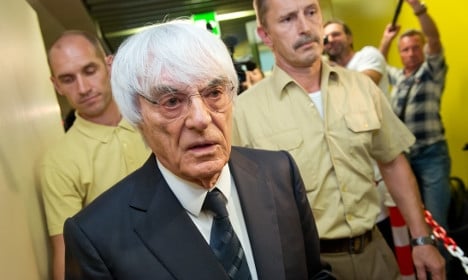 Ecclestone in court in Munich on Tuesday. Photo: DPA

In an interview with daily tabloid Bild newspaper on Wednesday, the 83-year-old said: “From where I’m standing, it didn’t look like the judges, in their opinion, had any other choice."

“It's certainly a bit unfortunate to pay so much money, but it would be worse to not have the money. I like this capitalist system," the resident of Gstaad in the canton of Bern added.

Ecclestone had been on trial since April on charges of paying a $44-million bribe to banker Gerhard Gribowsky of BayernLB bank to maintain his control over the Formula One empire.

“It wasn’t fun having to be in Munich for two, three days every week," Ecclestone said.

But he added: “I fell in love a bit with Munich and its people — I’d like to come back soon, perhaps to Oktoberfest.”

The bribery case against Ecclestone was dropped on Tuesday after prosecutors and the judge at Munich’s district court agreed to the $100-million settlement.

A German law, known as paragraph 153a, allows charges to be dropped against defendants if the court approves, provided the conditions imposed “serve the public interest”.

The law states the money must be paid to a charitable organization or the State Treasury.

In Ecclestone’s case, $1 million will be paid to a charity and the rest will go into state coffers.

Paragraph 153a is normally used to relieve the pressure on the justice system for relatively minor offences.

The sum paid by Ecclestone is thought to be a record since the law’s introduction in 1974.

While Ecclestone's penalty may seem steep, it would appear he can easily afford to shell out the sum.

His net worth has been estimated between $5 billion and $6.7 billion.

He has lived in the upscale mountain resort of Gstaad since 1990 but also maintains a home in London. 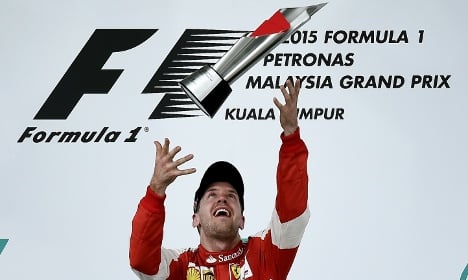 Crisis loomed like the black clouds over Sepang after the German Grand Prix's axing, deafening complaints from teams and a soporific first race in Australia.

But out of the blue, Vettel and Ferrari punctured Mercedes' dominance, while Malaysia put pen to paper on a new, three-year deal which secures the race until 2018.

While Formula One's problems are hardly solved, Ferrari's resurgence will at least pique interest in a sport which was again becoming dangerously one-dimensional.

Signs of the crisis were clear when Ecclestone resorted to asking media what should be done about a championship struggling with financial and structural difficulties.

Two teams fell by the wayside last year and Germany, a heartland of F1, joined South Korea and India in dropping off the schedule.

"I think sometimes we (promoters) tell him what to do and he doesn't listen," said Sepang circuit chief Razlan Razali, during negotiations with Ecclestone for Malaysia's new deal. "But I think only now he listens."

Ecclestone posited a range of potential solutions, ranging from a "Grand Slam" series of elite races to awarding points instead of grid places for qualifying.

But the 84-year-old ringmaster admitted his hands were now tied with much power held by private equity firm CVC, the major shareholder, and F1's squabbling teams.

Huge overheads and falling profits mean many observers think the sport is headed for a tipping point this year, which could force deep reforms.

"I think 2015 is going to be a watershed in Formula One, on many fronts," Force India deputy team principal Robert Fernley told AFP.

"And it's going to have to re-look at itself in a very in-depth way in 2015 to make sure that it addresses the concerns of the fans, the teams, the TV, the media, the whole group. "Because I don't believe that we're doing a good job at the moment at that."

Razali said Malaysia wanted only a three-year extension, shorter than the customary five years, because of caution over the health of the sport.

He cited the example of new team Manor, saying it was a "joke" they were allowed to join the championship despite not being ready for the start of the season.

Manor's cars were in bits at the season-opener in Australia and in Malaysia, only Roberto Merhi was able to take part – despite missing the required qualifying time.

In the event, Vettel won a thriller in Malaysia and he promised to celebrate with plenty of booze as he headed into the night with his Ferrari teammates.

While it's not quite party-time for Ecclestone, he can at least breathe a little easier as he contemplates the next step for Formula One.