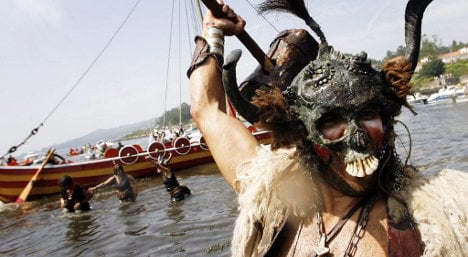 The ‘blood’ spilt during the simulated battles does taste distinctly like red wine. Photo: Miguel Riopa/AFP

On the first Sunday of August, Catoria is flooded with ‘blood-thirsty’ men and women from all across Europe.

Dressed in animal skins and armed with the finest plastic weaponry, they disembark on the rugged Galician coast with the aim of capturing the Towers of the West, just as Norway’s King Olaf II did a millennium ago.

The ‘blood’ spilt during the simulated battles does taste distinctly like red wine, but the visual effect it has when poured all over the fighters’ bodies is just as gruesome.

Catoira’s residents have proudly seen their local festival come on leaps and bounds since its first edition in 1960.

Declared a Festival of International Interest, it also includes musical acts by folk groups and a medieval market in the 11th century towers.

The occasion the Romeria de Catoira marks was recounted by local and foreign historians, as was the interest Vikings had in ruling over all of Galicia, Spain’s most westerly region, as they did with Normandy in France.

King Olaf II Haraldsson, first a Viking and finally made a saint when he converted to Christianity, called Galicia Jakobsland (Land of James).

Ninots (cardboard effigies) burn as one installation of the Fallas Festival is set alight in Valencia on September 5, 2021. Photos: José Jordan/AFP

The five-day festival is traditionally held in March but was cancelled last year as the Covid-19 pandemic swept Spain. This year, officials postponed the start of the UNESCO-recognised event until September 1st.

It was the first time that the festival was suspended since the end of Spain’s 1936-39 Civil War.

Each year, residents make hundreds of colourful puppet-like sculptures — some as big as a four-storey building — out of wood, plaster and papier-mache for the festival.

One ensemble from this year’s event was inspired by the hit Spanish Netflix series “Money Heist”. It depicted several people wearing red overalls and Salvador Dali face masks like the main characters in the show.

The ninots are displayed in the streets of the Mediterranean city and then burned on the last day of the festival — in a bonfire called the “Cremà” — in a centuries-old tradition honouring St Joseph, the patron saint of carpenters.

Fireworks lit up the night sky as this year’s bonfire, which features about 750 sculptures, was held without the thousands of spectators that the event usually draws.

The bonfire was brought forward by two hours to allow festivities to end before a nightly virus curfew came into effect at 1:00 am (2300 GMT).

After much debate a customary flower offering to the Virgin Mary was allowed to proceed — but without people lining the route, as is tradition.

“These are not Fallas as such, more like Fallas-related events that comply with health regulations,” said Valencia mayor Joan Ribo.

The Fallas festival is believed to have originated from pagan rituals marking the end of winter.

The pandemic has forced the cancellation of many of Spain’s most famous fiestas, including Pamplona’s bull-running festival and Seville’s Holy Week processions.