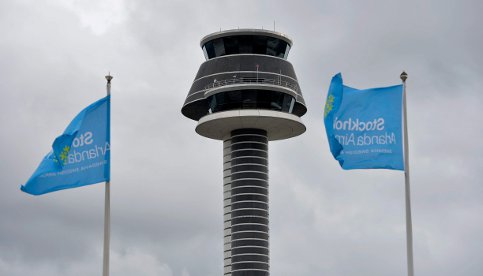 The Arlanda airport control tower. Photo: Anders Wiklund/TT
The flight, a Boeing 787 Dreamliner, circled above the Baltic Sea for 45 minutes to lose fuel before it landed again at Arlanda airport.
"At 15:47 we were informed by the pilot about the problem," said Britt Samuelsson, a spokeswoman at the Sweden's Joint Rescue Coordination Centre.
"I don't know if it is because he can't get the flaps back in or can't get them out. But he doesn't want fly all the way without looking it over."
Shortly before 4:30pm the plane touched down again.
"There was no emergency landing. The pilot told us that he made a normal landing," Samuelsson added.
Norwegian has suffered repeat technical problems over the past year with its new Dreamliner aircraft. After rows of delays, Swedish travellers have claimed millions of kronor in compensation from the airline, reported the TT news agency.
¨
The Local/iv/TT