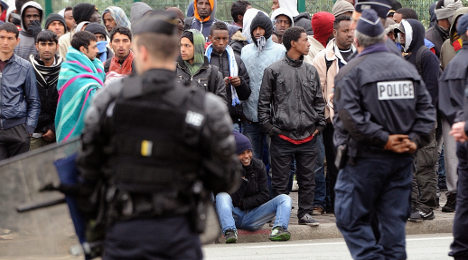 Riot police in Calais keep a close watch on migrants, whose numbers in the port town have swelled in recent months. Photo: Denis Charlet/AFP

The growing crisis in Calais, which has seen thousands of migrants descend on the port, has forced local authorities to draft in more riot police.

The prefect of the Pas-de-Calais region Denis Robin told media on Monday, that 40 more riot police are being stationed around the port to try and boost security.

The port of Calais has for years acted as a focal point for migrants intent on getting across the Channel to the UK, where they often seek to join family members.

Most try to jump aboard trucks heading across Channel on the ferries or the Eurotunnel.

But in recent months the numbers amassing in the town have swelled, leading to local authorities to take severe action.

Several camps have been forcibly closed with their occupants moved on, often with no alternative accommodation set up and decrees have been passed to stop migrants setting up camps in certain areas.

Last month The Local reported how the number of migrants arrested in the port had soared in the first half of 2014, a recognition of the increasing numbers, particularly from East of Africa, who are descending on Calais.

“I have obtained additional reinforcements for the port of Calais to improve the protection and monitoring throughout the night, which has not been possible up until now,” Robin told reporters on Monday.

Robin says the migrants were acting in groups by gathering on the roads leading to the port in large numbers to try “to saturate the security arrangements put in place”.

The prefect said the situation was becoming dangerous for the migrants themselves, 13 of whom were left injured after a mass brawl between various groups at the weekend.

He says the crisis is harming Calais’s economy and ruining the “attractiveness” of the Channel port.

Robin said there were around 1,300 migrants, mostly from east Africa, currently present in Calais.

There were reports that police were due to dismantle a huge camp called "Jungle 2" on Monday, but it appears authorities have delayed their decision to move in.