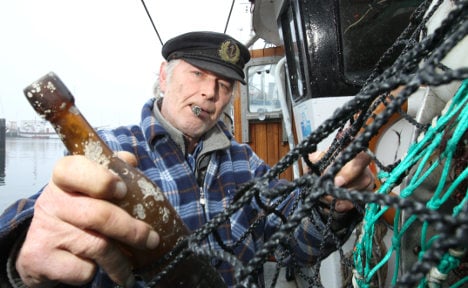 Konrad Fischer pulled the beer bottle with the scribbled message out of the Baltic off the coast of the northern city of Kiel in March.

It contained a postcard dated May 17th, 1913 written by a man named Richard Platz.

The modest Danish postcard had two German stamps on it and a polite message asking the finder to send it on to his address in Berlin.

Fischer who found the beer bottle in his net put the bottle on eBay to raise money to repair his 78-year-old boat Maria.

But minutes before the auction was due to end on Monday morning with the bidding at €3,660, his posting was taken down, after the granddaughter of the bottle's sender put in a claim of ownership for it.

Researchers set to work identifying the author of the message after it was found and managed to track down the writer’s 62-year-old granddaughter who lives in Berlin.

She had hoped the bottle would not be sold off. The bottle is currently being displayed in the International Maritime Museum in Hamburg until January 2015.