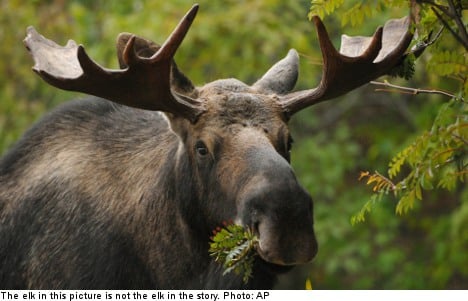 The authorities on the island in northern Sweden were flooded with calls from concerned members of the public saying that elks were roaming the streets of a residential area and terrifying people.

Witnesses reported that two elks had made a charge at passers-by as they were out for a walk. Locals who were going out with their dog were considered most at risk and the police were mulling over whether to kill the elks to maintain public safety.

Following meetings at the police station the authorities have now decided not to shoot the elks.

"We think that the attacks up to now have been of such a small character that the conditions are not right for killing them," Peter Moberg of the local police told the Östersunds-Posten newspaper.

The police said they made the decision as there were no reports of injuries in the elk attacks. Moberg said it was a family of five elks which lived near the housing estate which were the cause of the recent spate of incidents.

He added that the prospect of shooting several elks in a residential area would be a difficult task and instead called on the public to show greater respect for the animals.

"We need to show caution and realize that elks are wild animals. If they feel trapped then even a seemingly quiet and peaceful animal can become irritated. You shouldn't go out and risk your own life by attacking a moose, it is better to call us," said Moberg.

The police have since issued a general warning to the public telling them to be more careful if they encounter an elk.

Earlier this month The Local reported how a curious elk had to be put down after it sustained injuries while breaking into a family house in southern Sweden.

Meanwhile, in June school children fled a classroom after an elk broke through a window. In 2011 an elk made a beeline for a retirement home while the same year a drunken elk got stuck in a tree after feasting on too many fermented apples.