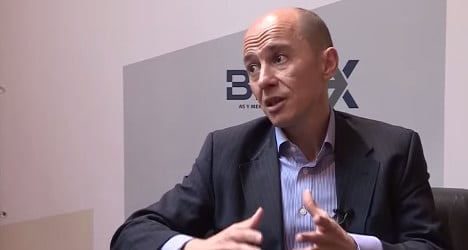 It's been a spectacular fall from grace for the charismatic García.

Until recently, his company was riding a massive wave: it had contracts to provide free Wi-Fi in 65 cities with some 60,000 connection points in locations including Paris and New York, and on transport networks like London's Underground.

In a June 25th interview quoted by Bloomberg, García, a father of two, said the company was “going places” and planned to provide Wi-FI to 20 percent of the world’s population.

Everything pointed to the classic tale of a self-made man, a shining example of the entrepreneurial spirit so often said to be lacking in Spain.

García, from Madrid, started out his business career when he was 14 by selling badges and cassettes at the capital’s iconic Rastro flea market.

Then, when he was just 16, his whole family died in a car accident  — “a terrible blow”, he said in one interview cited by Spain’s El Mundo newspaper.

García himself suffered 24 broken bones in the accident and his liver was split into three pieces, the paper added — although even these biographical details are being called into question in the wake of the scandal that has erupted around Let's Gowex in recent days.

But even family tragedy didn’t stop García on the business front.

By 19 he was importing cars from Germany, which taught him about the importance of international relations, according to Spain’s El Confidencial news site.

From 1995 to 1998 he worked with Spanish telecommunications giant, the starting point of a career based around the internet.  He had had, he said, “entrepreneurship in his veins since his youth”.

But on Thursday Spain’s High Court said it was calling Genaro into court for questioning over “his manner of falsifying accounts” after it emerged he had cooked his company’s books.

This was just the latest chapter in a rollercoaster ride of a week which has seen the suspension of trading in Let’s Gowex shares and investors and “shocked” staff saying they would launch legal action against the man once described by Spain’s El Confidencial newspaper as a “visionary”.

It all started when US firm Gotham City Research released a report calling Gowex a "charade" and that its shares were worthless. In a 93-page report, Gotham City said Gowex's actual revenues were "at most" 10 percent of those reported.

Gowex's audit fee was only €40,000, far less than would be expected for a company generating revenues of more than 180 million euros, the firm said.

"I am willing to face the consequences and cooperate with justice," García said in the wake of the revelations.

García also wrote to staff apologizing for the debacle. He had caused "irreparable damage" he said, in the open letter published in El País newspaper.

That letter concluded with the Rudyard Kipling poem “If” about the vicissitudes of fate and the meaning of maturity.