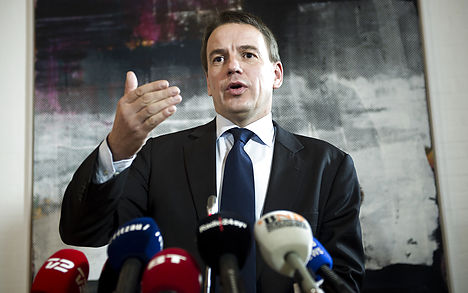 Christian Friis Bach was the development minister from October 2011 - November 2013. Photo: Keld Navntoft/Scanpix
A leading member of the governing Social Liberals (Radikale Venstre) is leaving Danish politics for a top United Nations position, the party announced on Wednesday.
Christian Friis Bach, the party’s group leader and Denmark’s former development minister, has been named the head of the  UN Economic Commission for Europe (UNECE). With that position, Bach becomes the highest-placed Danish official within the UN.
“I am very grateful to have been offered the position as the leader of UNECE,” Bach said in a statement. “There, I will have the ability to engage myself in foreign policy, something that I have a real passion for and have always been occupied with. I hope I can make a little difference in the UN and in the world.”
Bach will start his new position on August 4th.
The Social Liberals’ party leader, Economy Minister Margrethe Vestager, said that Bach’s appointment has “the backing of a unanimous parliament”.
“I am very happy to have a Dane and a radical placed so centrally in the UN,” Vestager said. “Christian Friis Bach in his time as development minister acquired solid international influence and he pushed through the biggest changes in Danish development policy in 40 years by putting human rights at the very forefront.”
Bach was forced to step down as development minister in November 2013 in the midst of a scandal revolving around former PM Lars Løkke Rasmussen’s involvement with the South Korean NGO Global Green Growth Institute (GGGI).
Bach gave incorrect incorrect information to parliament about changes to the travel policies of the organization, which was overseen by his ministry.