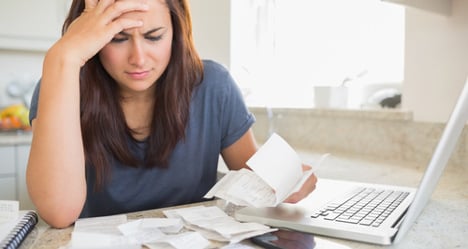 Photo of a woman trying to understand her bills: Shutterstock

The latest revelations from the Pisa 2012 education study, carried out by Organization for Economic Co-operation and Development (OECD), shows major differences in the abilities of 15-year-olds to grasp money matters in 18 countries around the world.

Students were asked to perform a range of tasks from basic problems, such as interpreting the information on a bill, to more complex ones like being able to understand taxation law, the daily El País reports.

Chinese students from Shanghai – the only part of the country where schools participated – came out top in the financial literacy test with an average of 603 points per student, followed by Belgium, Estonia, Australia and New Zealand, which were all well above the Pisa average of 500 points.

Spain, on 484, was below average, although it was slightly ahead of Italy, which scored 466.

Spain’s score was similar to those obtained in other previously published sections of the Pisa 2012 survey, in which Spanish students averaged 488 in reading, 496 in science and 494 in mathematics. The report does mention that the financial literacy results were “especially low” among students who had obtained a good score in mathematics.

Speaking about the results on Wednesday, Spain’s secretary of state for education, Montserrat Gomendio, pointed out that “after the economic crisis we have had and which we are starting to emerge from, it is important that citizens have an understanding of how the national and global economies work so that they understand the repercussions”.

According to the report, 59 percent of Spanish 15-year-olds have a bank account and 41 percent earn money doing odd jobs during holiday periods.

The education reform being introduced by Spain’s Popular Party government mentions the need to include financial matters in the school curriculum.

“Young people on the brink of adulthood are poised to make complex financial that will have an impact on the rest of their lives. Results from the PISA 2012 financial literacy assessment show that many students, including those living in countries that are high-performers in the main PISA assessment, need to improve their financial literacy,” the report’s authors say.

According to EU law, banks must offer a “basic account” for essential operations such as depositing and withdrawing money, making transfers and receiving salaries.

The EU created this “basic account” with the aim of avoiding financial exclusion and providing everyone residing in the bloc with a current account, even if they hardly earn any money or don’t have a fixed address.

READ ALSO: What’s the maximum amount you should have in a current bank account in Spain?

What are these basic accounts?

They allow you to carry out up to 120 operations per year and have a debit card, paying only a commission of €3 per month or €36 per year to use it.

The Bank of Spain along with consumer associations are encouraging banks in Spain to make these types of accounts more well-known to their customers.

READ ALSO: What to be aware of before opening a shared bank account in Spain

Who are these basic accounts for?

The accounts are ideal for those who have minimal incomes, as well as those who are not comfortable with technology such as using computers, tablets or smartphones as they don’t require you to use any apps or carry out any extra operations online.

They are also good for vulnerable consumers, due to the fact that banks must agree to give you the account free of charge for two years, extendable two by two, provided you demonstrate that you continue to be so.

You will be considered vulnerable if:

Can banks refuse to give me a basic account?

Not really, no. Banks are obliged by law to be able to provide these low-cost accounts and can’t refuse you unless they find out that you are using it to launder money or threaten national security.