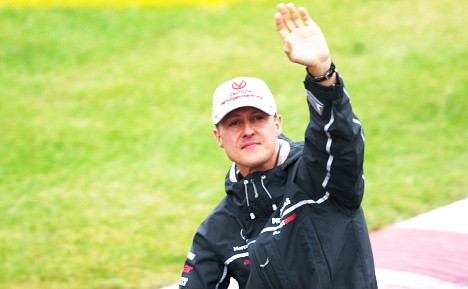 A doctors' briefing on the motor-racing star's treatment after he suffered a devastating ski accident in December was stolen and offered for sale for 50,000 euros ($68,000) last month after he was transferred from hospital in the French city of Grenoble to a unit in Switzerland.

French police opened a criminal probe into the theft of the document, which prosecutors said consists of several dozen pages that summarize the seven-time world champion's treatment in Grenoble.

A Zurich-based helicopter company, Rega, admitted Monday that it was to have transported Schumacher, 45, to a clinic in Lausanne after he emerged from a coma, but claimed that it had "no knowledge of the investigation and had not been contacted by the authorities".

Previously it was reported that Schumacher was transported to Lausanne by a Swiss road ambulance.

Rega —- the main operator of air ambulances in Switzerland — admitted that it had received a medical report on the star from his doctors in Grenoble before the planned  flight but believed "patient confidentiality had been preserved".

French, Swiss and German journalists were contacted last month by email and offered a dossier on Schumacher's health by someone calling themselves "Kagemusha" (Shadow Warrior) — a reference to a 1980 film by the Japanese director Akira Kurosawa.

The person had attempted to hide their identity behind several other online aliases as they contacted journalists, the last of whom was "Jeremy Martin".

The offer first came to light when a journalist from the German daily, Bild, contacted the former racing driver's spokeswoman, Sabine Kehm.

Grenoble prosecutor Jean-Yves Coquillat said the report offered for sale was likely to have been a draft left in a hospital bin rather than the final version.

A source close to the investigation said the document appeared to be a summary written by Schumacher's doctor for his transfer to Switzerland.

Schumacher's spokeswoman Kehm has warned that the documents are confidential and promised to sue anyone who publishes them.

The driver had spent more than five months in hospital in Grenoble after sustaining serious head injuries in a skiing accident at Meribel on December 29th.