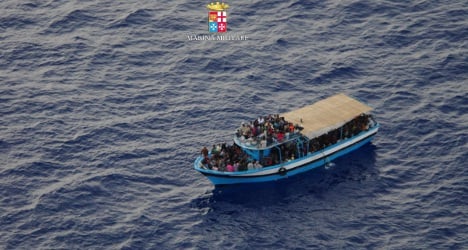 Seven boats carrying migrants and asylum seekers mainly from Eritrea, the Democratic Republic of Congo, Sudan and Algeria were intercepted between Saturday and Monday, bringing the total number of people arriving on Italian shores this year to over 68,000.

Dozens of children and women were among the new arrivals, and rescue workers on Sunday plucked a woman in labour from a boat in the Strait of Sicily and flew her to hospital by helicopter, the navy said in a statement.

Police in the town of Ispica near the city of Ragusa were meanwhile searching on Monday for around 100 migrants, including women and children.

The group were dropped off into shallow waters near the shore under the cover of darkness by a trafficker who then turned the boat around and headed back out to sea.

Italy's navy has been conducting rescue operations for months aimed at preventing more shipwrecks of the sort that have killed more than 400 migrants.