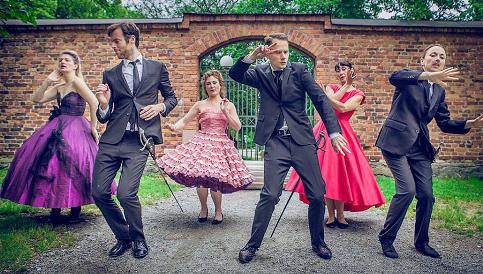 Yes, indeed. The Stockholm English Speaking Theatre (SEST) is celebrating William Shakespeare's 450th birthday this year by presenting one of his jolliest plays: Much Ado About Nothing.

Bring along your chairs and blankets to the fragrant lemon groves of Sicily – or rather, Rosendals Wärdshus on Djurgården. But that's close enough, right?

Leon said that the company chose Much Ado About Nothing because it blends humour with serious issues like honour, and presents issues that people can still relate to today.

The show will be performed on land belonging to the Swedish Royal Court – which makes it all the more believable, not to mention fun.

"We spoke to the people managing the royal land, and they were very happy to hear from us," Leon said. "They were eager to have theatre in English. And of course places like Drottningholm and Rosendal are amazing and gorgeous. Especially for tourists, since they are one of our main audiences, it's perfect."

Do you want to see Shakespeare here at Drottningholm? Of course you do. Photo: Imagebank Sweden/Melker Dahlstrand

For a chance to win a pair of tickets to one of the shows, simply like our Facebook page and comment with the name of any character from any Shakespeare play ever. But there's a catch, it has to be one that's not already been mentioned. Good luck.

The contest is now closed, thanks for participating.