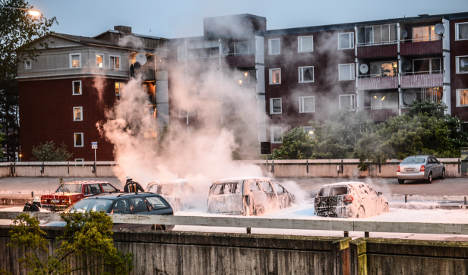 Burnt vehicles from soon after the shooting. Photo: Fredrik Sandberg/TT
A new investigation by prosecutors in Stockholm found that the police officer shot the 69-year-old Husby pensioner in self-defence. The case has now been put to bed.
"I have gone through the material from the reconstruction," head prosecutor Pär G Lindell told the TT news agency, adding that the incident occurred in a very tight space.
"The knife-wielding man was about one metre from the policeman. A firearms trainer who was interrogated said that in such situations, you have to shoot at the chest or the head in order to protect yourself.
"It's only if you're at a safe distance that you shoot at the leg."
READ ALSO: The Local editorial: "Stockholm is not burning"
The man's fatal shooting is believed to have been the spark that led to week-long violence, protests, and destruction in Stockholm's outer suburbs in May last year.
The incident occurred after the pensioner stood on his own balcony brandishing a large knife. His wife was with him at the time, prompting police to storm the apartment after a lengthy stand-off.
IN PICTURES: See the damage from the Husby riots
The prosecutor ruled that the shooting was not manslaughter, not professional misconduct. He reminded those critical of the case that the policemen on the scene did not have access to all the information known today, and were acting in an emergency situation.
"It's always easy to criticize things in hindsight," he added.