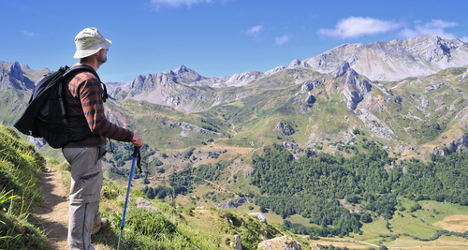 Photo of man hiking in the mountains:Shutterstock

But 92 percent of the trips made by Spaniards were within the country, the figures also show. That's against an EU average of 74 percent.

Spaniards also had a shorter average trip duration of 4.7 nights, against an EU average of 5.1 nights.

The top foreign destinations for Spaniards were France, Portugal and Italy.

Spain was the most popular travel destination for people from the UK, Portugal, and France while it was the second most popular choice for Belgians, Italians and the Irish.

The number of tourists from Germany was up 11 percent to 2.51 million, while 3.1 million Brits arrived (up 6.5 percent). In addition, 13 percent more Italians flocked to Spanish shores (0.87 million).

In 2013, Spain overtook China to become the world's third most popular destination for international tourists, by luring 60.6 million visitors.

Those visitors splashed out a new record sum of €59.08 billion ($80.82 billion) as political unrest in Turkey and northern Africa saw tourists turn their attention towards Spain.