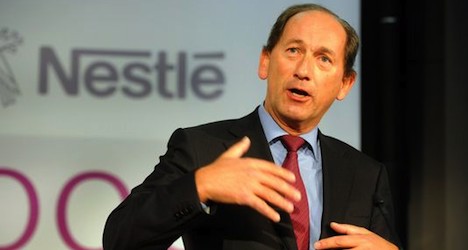 At Nestlé, the world’s largest food company based in Vevey in the canton of Vaud, CEO Paul Bulcke was paid 230 times the salary of the lowest-paid employee last year, the Travail.Suisse union said.

Nestlé came ahead of UBS’s highest paid executive, Andrea Orcel, CEO of the UBS Investment Bank, (229 to one), the union said.

Top executives at pharmaceutical companies Roche and Novartis, as well as chocolate maker Lindt & Sprüngli, all took home more than 200 times those on the bottom rungs, according to the report.

The union’s study of 27 Swiss companies showed the pay gap is widening despite legislation mandated by a national referendum (the Minder initiative) to stop “abusive” pay in the country’s board rooms.

Travail.Suisse said government policy measures were needed to reverse the trend, including a “solidarity” tax on all those earning more than 500,000 francs ($558,000).

Its study found 42 executives among the 27 companies studied earned more than 100 times the least paid employees at their firms.

The gap between those at the top and the bottom increased most (up 29 percent) at UBS, Switzerland’s largest bank, the union said.

The pay gap remains relatively compared to that in the US, where income disparities among the highest in the world.

The CEO to average worker (not lowest paid) ratio topped out at 1,795 to one for American fashion retailer JC Penney’s chief executive Ron Johnson, according to a 2012 study by Bloomberg.