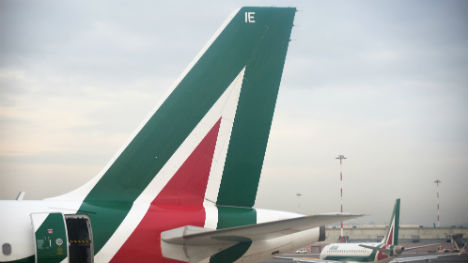 An Alitalia airplane is seen at the Fiumicino airport on January 9th 2014 near Rome. Photo: Vincenzo Pinto/AFP

Alitalia chairman Roberto Colaninno and chief executive Gabriele Del Torchio are charged with negotiating details of the deal with the Abu Dhabi airline, said the statement issued after a marathon meeting.

Etihad has for months been negotiating to buy up to 49 percent of the stricken Italian flag carrier, which is facing bankruptcy.

But talks have have stumbled over Alitalia's heavy debt load and forecast cuts to some 2,200 jobs, out of a total of 12,800, as part of the deal.

Officials in northern Italy have also raised concerns over the potential impact on Milan's Malpensa airport, which they fear could be seriously penalised by the deal.

Detailed talks on all those issues were set to continue despite Friday's green light.

Del Torchio, quoted by Italian news agency ANSA, said after Friday's talks that negotiations with banks on Alitalia's debt burden were "continuing in the right direction."

"It takes time, since it involves a large sum. But everyone clearly wants to reach a solution with Etihad."

On the jobs front, new talks between Alitalia management and unions were set for Monday, Italian media said.

Italian Transport Minister Maurizio Lupi warned earlier this week that negotiations would have to be wrapped up by mid-July on the tie-up with Etihad, which he said was prepared to invest up to €1.25 billion in Alitalia by 2018.