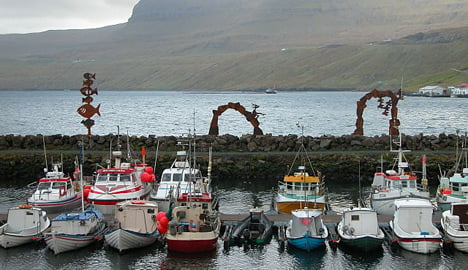 Faroese fisherman have been hurt by the sanctions on both herring and mackerel, but now both disputes have been settled. Photo: Erik Christensen
The European Union said Wednesday it had reached agreement with the Faroe Islands to settle a dispute over herring fishing and would drop punitive measures against the tiny island chain.
The Faroe Islands, located between Norway, Iceland and Britain in the North Atlantic, took the issue to the World Trade Organisation last year, arguing that Brussels had no right to bloc herring imports from the autonomous Danish province.
The EU had accused the Faroe Islands of massive overfishing after it set its own quotas for herring in defiance of the 28-member bloc.
EU Maritime Affairs Commissioner Maria Damanaki said the Faroe Islands agreed to end "their unsustainable fishery" for herring in the northeast Atlantic and halt their WTO complaint against Brussels.
In return, the EU would lift its import ban and other punitive measures, Damanaki said in a statement.
"I am satisfied that we can soon consider the herring dispute as something of the past," she added.
In March, the EU reached agreement in a similar dispute over mackerel with Norway and the Faroe Islands after four years of sharp exchanges on what was the best way to sustainably manage the fishery.
The issue of quotas has become more heated as fish species have started migrating further north in response to rising sea temperatures.
When the Faroe Islands unilaterally increased its quotas in 2010, Brussels responded with sanctions for its overfishing of herring, banning imports of both mackerel and herring from the archipelago and forbidding some of its fishing boats from docking in EU ports.