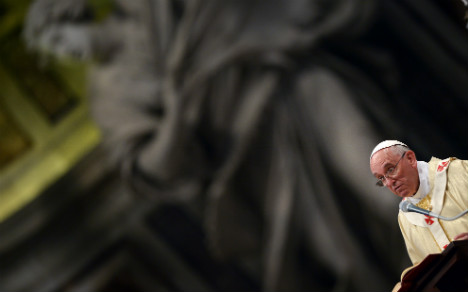 The international community risks "forgetting the daily victims, the unspeakable suffering, the thousands of refugees, including the elderly and children, who suffer and sometimes die from hunger and disease caused by the war," he said.

"We risk getting used to the Syrian crisis. The globalisation of indifference… This indifference hurts us!" the pope said at a meeting with 25 Church-backed aid groups from the region.

The 77-year-old called for "a silencing of arms and commitment to negotiate, putting the good of Syria and its people first" as well as those who "have had to take refuge elsewhere and have a right to return as soon as possible to their country".

The conflict began as a peaceful, Arab Spring-inspired movement demanding political change that descended into civil war after Assad unleashed a brutal crackdown.

The Church was "deeply worried", in particular about Christians' "survival in the Middle East", he said, days after returning from a tour of the region.

Francis called on aid groups to "support local churches and all victims of the war, without ethnic, religious or social distinctions."

On Thursday, Cardinal Robert Sarah, head of the Vatican Cor Unum department, which coordinates Roman Catholic charities, called on the United States, Russia and the Middle East to "find the courage for united action" on Syria.

According to data gathered by the aid groups, the conflict in Syria has created two million refugees, more than half of which are minors, he said.

"There are over nine million people who need health care, 60 percent of hospitals have been destroyed or are unusable", Sarah added.